The iphone chimes later in the night than usual. The text message, from a college-aged friend, reads, â€œthanks for playing with me on the ride today.â€

It is true that exercise comes wrapped in many different packages. There is gyrating on a AHA-endorsed Wii, and then there is the Tuesday Night World championships, as it is called here in Louisville.

Any city wishing to call themselves a cycling city has one of these weekly clashes of local titans. As host of the upcoming 2013 World Championships of Cyclocross (yes, that’s right â€œWorldâ€â€”like in Belgium and others), and home to numerous national champion cyclists, Louisville’s weekly battle of mitochondria and androgenicity is especially spirited.

The parcours favor a group spirit. There are no leg-breaking hills, so the boredom of climbers taking off over the summit, never to be seen again, is avoided. The red lights, or the dash around the corner hoping that the light is green for you, and then red for the group creates a repeated stomping and re-grouping, and this re-grouping allows the pretenders, the beginners, and especially, the bloggers a respite.

The players come from all walks of life. The playful college boys are there. The serious racers are there too. Little 500 champs, National Champion road racers, time trialists and crit racers seem clustered on the same team, whose racing kits are adorned with a rodent. Despite the presence of many other teams, it is usually a David-versus-Goliath struggle, except David’s stone is a harmless pebble and Goliath nearly always prevails. We mortals try, but genetics never lie.

The cast is an all-American one: fire fighters, teachers, preachers, businessmen, hedge-fund managers, a few doctors (not many), and even a couple bloggers. One thing is for sure, all who choose this ride can generate watts.

There is a rule in bike race (racing 101): when in the slipstream of a rider who attacks, you should follow. This feels good for the first 10-20 seconds, then as the lactate builds, the heart rate climbs, and the helmet feels tighter, this decision seems worthy of  reconsideration. It’s too late, now there is a gap, you are “off the front!”  The problem here, in Louisville, on Tuesday night, is that your company off the front is not another electrophysiologist or blogger, but rather a former champion cyclist. Oooh, I think to myselfâ€”bad idea, this is the wrong bus.

It gets worse. You have ethics, a sense of fair play, and of course, androgens, so you try to show your mettle to your break-away companion, and â€œride-through,â€ into the wind. And invariably, at the moment the fifty-strong group of the city’s elite catches up, another flurry of aggressive forays ensues. This is bad, as you are still residing in the house of pain from the previous adventure off the front.  As the group goes by, you hope there is one more match to light, so as to catch the back of the runaway train.

The epilogue on the patio:

The ride has only been ninety minutes, but feels like many hours. I am home. I sit to remove the bike shoes. Endorphins surge, which create a stare into nothingness. Catherine, a teen-age daughter who notices little about her father, sees me, stops and and says, â€œDad, what’s wrong with you? Why are you just sitting there looking like a zombie.â€

“It was a pretty hard ride,” I say.  I think, but of course I know she wouldn’t care, “here is the proof as captured by my friend, the watt meter.” 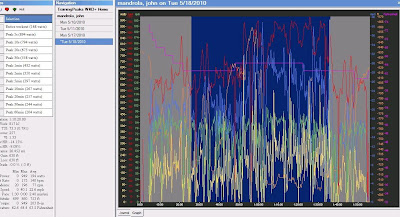 There are common sense rules of exercise. Tops on that list is that exercise should enhance one’s life force more than it draws from it. Racing around Louisville, on Tuesday nights in the warm weather months, with carbon fibre bikes, and the local cycling legends seems devoid of common sense, and surely it takes more from me than it gives. But yet, it is a hard habit to break.

That my health allows such folly is worthy of gratitude.