One of the often sad facts of ablation in the private world of electrophysiology is the lack of “learners,” or visitors who call on our EP lab.  Heck, even Henry David enjoyed the occasional visitor to his cabin in the woods.

When an inventor, patent holder and heart surgeon with his engineering wiz kid asked to observe an atrial fibrillation ablation, it was easy to accept.  Their science project in the upcoming years is to invent a new way or tool/device to approach atrial fibrillation ablation.  Having enjoyed success in inventing tools for other less daunting problems, they exude an air of confidence, as if to say, AF isn’t so bad.

The visit was arranged while sitting together at the Boston AF symposium, where expert after expert described the many daunting challenges of AF therapy.  The massiveness of the job at hand was on full display, and our inventors seemed in awe of the distance needed to travel to achieve success.  Maybe, for the first time, one senses the slightest crack in their sureness of finding a new Edison-like breakthrough in AF ablation.

Despite doing AF ablations since 2004, having distinguished visitors watch a procedure that has the potential for serious complications makes one at least modestly nervous and so I was. 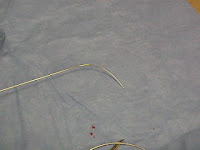 Things proceed smoothly, including the trans-septal puncture -the poking of a sharp harpoon like needle across the atrial septum of a beating heart in a fully anti-coagulated patient.  Yep, we are overpaid.

The right sided pulmonary veins prove very difficult to isolate and the heart surgeon/inventor comments that we are in the same place they were in the 1980’s with bypass surgery. Translation: “you all have many miles to ride.”  The inventor, who by definition is a master of the obvious, adds the question:  how can we treat millions of patients with AF with this complicated procedure that utilizes general anesthesia, thousands of dollars in catheters, complicated 3D reconstruction, and requires years of specialized training?  For inventors, AF treatment is a fertile field indeed. 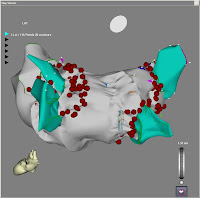 A 46 year old ablator hopes the inventors can help us soon, as the creation of lines with spot burns in the left atrium is like a hard climb, or as we say in the mountain bike world about a dangerous trail in which a mistake could wreak havoc, “high consequence.”

Those red dots which isolate areas that trigger or maintain atrial fibrillation look simple enough on an image, but the process of making them in real life, on a real person and having them result in AF “cure” remains a lofty goal.

3 replies on “Visitors to the EP lab: Inventors who aim to help us ablate Atrial Fibrillationâ€¦”

You are never nervous!

Nervous? You sure fooled me.

The problem with the "fertile field" of AF is that you have inventors growing corn, tomatoes, and potatoes when the most doctors just want peppers. Lack of a clear direction but an abundance of technology makes a turbulent field for both physicians and engineers.

In time, I'm confident that the AF frontier will be conquered.

I see what you mean by Walden Pond references.