The water is thick brown, and reportedly is only 2 degrees over its solid state.  Standing on the dock in a bike kit and a wet life preserver, a coldness invades the core; a core which is busy preparing itself for the immediate future.

Three, two, one and “PLUNGE” is heard.  While in the air before submersing, the inwardly directed thoughts are for calm. However, submersion in icy waters brings the reptilian brain to the fore and all efforts are directed toward extracting oneself from this insult.   In the water, inspirational effort is met with an outward constriction; a human’s life force, breath, is restricted.  The ladder is about ten feet away, and I see the quicker studies, who jumped nearer the escape ladders already climbing to freedom.  Although close in distance, escape seems very far.  A strong grip comes over my arm and the frogman slings me to the ladder. 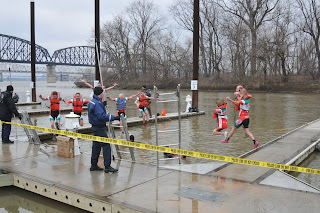 Staci, a wife and doctor, believes our cycling team should have a charity.  Correctly, she knows that we are blessed with good health and above average mitochondria. And, so it is that bike racers choose to raise money for the Special Olympics.  Agreeably, there are many good causes, but supporting Special Olympians who muster the same desire to enjoy the thrill of the race as us, seems a perfect fit.  Even better that the charity entails the mental and physical challenge of plunging into icy waters, as bike racers are generally repelled by the plushness of golf scrambles.

It is true that jumping in freezing waters is a modestly interesting story, but, far more compelling for me, is the discovery of the overwhelming generosity of so many, and even more striking, how this obvious goodwill touches the heart.   Although, there is not an artery, vein or nerve which is known to physically transmit goodwill to the heart, surely a connection exists.  Maybe, like the magic of wireless telemetry, goodness feeds the heart via unseen connections.  Spirit or spiritual?  Did I really say that?

The “red flags” on the Polar Plunge website denote a donation in my name to the Special Olympics.  Each time a new red flag appears, the generosity of another human is documented and a warmth comes over the beating heart.  “Wow, why did he or she donate to me,” I ask myself.

The absolute number of donations was staggering, as was the wide variety of people who gave. Donators to the cause ranged from the most famous doctors who frequent the national press, to an old friend in a nearly forgotten hometown, with many friends, patients, family and co-workers in between.

Working to raise money for a great cause was the ends, but, as is often the case, the journey provided the amazing sensations, and again, I stand educated.  Now, yet another recommendation to patients who search for greater heart health:  find a cause and work on it, and the goodness that accumulates will surely permeate through unseen connections and soothe the human heart.

-Thank you to the Special Olympics who provided the cause.

-Thanks to Staci, who corralled us into the bus for this journey.

-Thank you to the many donors, whose generosity helped me discover such goodness and its connection to the heart.

-Thanks to my teammates who are really just great friends, as sharing the journey surely enhanced it.

-Thanks to Tom Moran who donated to the cause with his time, talent (photography) and treasure.