The Courier-Journal had nutrition front and center the last two days.

First up; the trans-fat issue. I know, you say boring. Maybe, but trans-fats are seriously toxic to your arteries(not Staci toxic-really toxic). They are inflammatory to the inner lining of the arteries. Sound smart: call this the “endothelium.” Trans-fats are man-made (not found in nature) chemical fats. They are seriously irritating to the endothelium, making clots and blockages more likely.
What are trans-fats? Look for the word hydrogenated. Commonly, you see “partially hydrogenated” oils on labels. I had to give up one of my favorite pre-ride foods, Nutella, as it has partially hydrogenated oil.
Yesterday there was a public forum on whether Louisville should ban trans-fat. 50 people expressed their opinion. NY city banned trans-fat in 2006! Search google using the key words “New York City trans-fat ban,” and the first link is the article describing the ban and the second is an article citing the success of the ban. In this Forbes article they use the words, “in the beginning there were the usual nanny comments.” In the end though, just like the smoking ban, life went on and small business did not fail.
Although, we are happy in this community, these illustrations of how far behind KY is, are maddening. We are holding public forums on opinions about banning a toxic cooking oil, when one of the largest cities in the world has had it banned for 3 years. That’s enough time to have objective data on the success of the ban. Duh.
KY is top 5 in nation in obesity, heart disease and diabetes. Nope, NY is wrong, let’s keep frying with arterial toxins.
If this isn’t bad enough, today I read a 600 word essay in CJ on this delight. 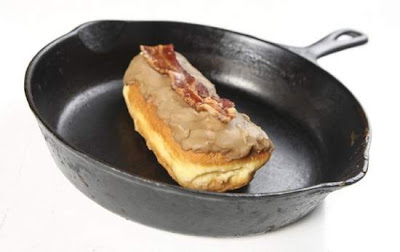 A bacon topped maple donut. OMG! Let’s see. Processed white flour, trans-fat, high fructose corn syrup topped with saturated pig fat. I know, Mandrola, lighten up. The problem is people eat this stuff. Then, they see me because their heart is out of rhythm or they’re short of breath walking up an incline. Go figure. I pat their huge bellies and say: “what is that?”
If they are 65 or greater, then the government (that’s you) are paying for their heart, BP and diabetes care they wouldn’t have needed if not for “lifestyle” factors.
Since healthcare reform is likely going to increase government paying for care, then it seems OK (maybe prudent) that trans-fat bans and smoking bans be the norm.
Why do so many patients struggle so mightily with such easy nutrition decisions? Why does KY struggle with such easy health decisions? Are there really that many more masters of the obvious in NY?
JMM