This is a distinctly modern problem. In times past, doctors treated disease. Patients saw their doctor when they were sick. They had a problem; doctors offered help.

The doctor of today often improves health by removing healthcare. Itâ€™s one of my favorite tricksâ€”stopping nonsense.

Excess healthcare happens for many reasons. Three big ones are the conflating of risk factors with disease, overdiagnosis and the one-disease-one-treatment mindset.

A high cholesterol level is not a disease but it is treated with a pill. When women acquire the diagnosis of ductal carcinoma in-situ (DCIS), you can bet they, too, accept treatment. Worse, medical education, guidelines, and electronic health records conspire to favor the view of patients not as people but as lists of diseases. Indeed, the problem list is a big problem.

One way excess healthcare manifests itself is polypharmacy–too many pills. I chose to write about this topic in my last column over at theheart.org | Medscape Cardiology. Itâ€™s relevant for cardiologists because we prescribe lots of medications.

In fact, itâ€™s almost a mandate for us to prescribe at least four medications for patients with established heart disease. I call these the big-fourâ€”aspirin, statins, beta-blockers and ACE-inhibitors. They are the untouchables. The big-four drugs are mandated because they are â€œevidence-based.â€ Clinical trials “proved” their worth.

Ahâ€¦but if we slow down a bit and actually look at this evidence, we find reasons to doubt our certainty.

One obvious dilemma: once patients are prescribed these drugs, they stay on them indefinitely. Then, as people with heart disease age, and gather other diseases, they are put on more pills. In the one-disease-one-treatment framework, medication lists grow and grow.

A recent review paper in the influential Journal of the American College of Cardiology addressed the issue of long-term use of cardiac drugs.

The authors of this paper highlighted four gaps in the â€œevidence” base underlying long-term use of these drugs. I hadnâ€™t thought much about these obvious issues.

Disconnect between short-term studies and long-term use: Clinical trials that showed benefit of the big four heart drugs were carried on for short time periods, ranging from 1 to 4 years. Many patients take these drugs far longer than that. Does the short-term benefit carry on for years and decades? Maybe it does, maybe not.

Risk is not constant. In the post-heart-attack trials, most patients were enrolled right after the injury. Thatâ€™s a time when risk of death is high, and so medicines stand to benefit. After the heart heals, the risk of death decreases. Do drugs started during the high-risk phase of a disease confer the same benefit years later when the risk is lower?

What was may not be what is: Most of the clinical trials of the big-four drugs were done in a different era. The median publication date for the 82 beta-blocker trials: 1982. That was a time when heart attacks went on uninterrupted, as we did not have clot-dissolving drugs or acute angioplasty and stents. Most heart attacks now are aborted and injury lessened. Do drugs that act mostly to relieve strain on the heart confer the same benefit in an era when most heart attacks cause much less strain or injury?

Can findings of clinical trials be applied to everyday patients? Older patients and those with multiple medical problems are under-represented in clinical studies. That makes it hard to generalize the findings to everyday real-world patients. This a key issue for today’s doctors because our population is aging and the benefit/risk ratio of cardiac drugs lessens in older, sicker patients. Elderly patients are more prone to adverse effects of drugs. Do the benefits of these drugs apply to patients not represented in clinical trials?

The reason I emphasize these gaps in knowledge is not to say cardiac drugs are no longer useful. My aim is two-fold. One is to slow down the epidemic of polypharmacy. I see patients nearly everyday who have been taking cardiac drugs for years and years. I hadnâ€™t really thought about the fact that the evidence for benefit was so outdated and short-term.

The more important point of this exercise is to emphasize the value of critical appraisal of our evidence, and hence our defaults. This doesn’t just affect cardiologists. It’s a matter for all doctors and patients.

In his famous “This is Water” speech to Kenyon College graduates, the late American writer David Foster Wallace made it clear that you see a lot when you choose to notice the obvious.

The title and link of my column: Polypharmacy: An Obvious Problem in Need of Attention

Iâ€™m going to tell you a secret about my office practice. (Yes, procedural-based doctors spend long hard days toiling in the office.)

On office days, I often play a little game with my imaginary friend. He challenges me to leave the prescription pad in the drawer for the entire day. The idea being that patients are on enough meds already, lifestyle changes are underused and the human body often heals itself. My buddy also warns me about making patients worse. That makes him mad.

I slipped up once and let a colleague in on my challenge. He was aghast, adding this: â€œJohnâ€¦.cut it out…how are we supposed to help heart patients without medicines?â€ He didnâ€™t mention the whole imaginary friend thing. Whew.

Letâ€™s get a little serious about the paradoxes of using chemicals to treat disease. 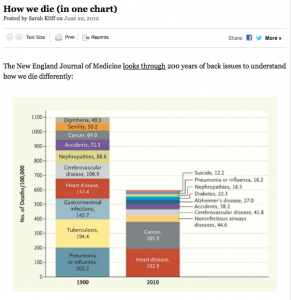 There is little doubt that medicines have improved mankind. Just look at this highly tweeted NEJM graph of how we died 100 years ago v. now. Much of the gain in lifespan has come from the beneficial effects of medicine.

In many ways, I am a believer. There are some really good heart medicines. Here are three that stand out for their benefit, safety and depth of supporting evidence.

Obviously, there are many more medicines on the list of â€œgood medicines.â€ Doctors and patients are immersed in a sea of potentially good medicines.

The question is how much medicine is enough? Gaining benefit from medicines doesn’t add up like numbers on a spreadsheet. You canâ€™t just sum the incremental benefits and risks. Drugs interact with each other. These are complicated chemicals that modify complex human biologic systems, often in highly individualized ways. Thatâ€™s a fancy way of saying: modern medicine is not Mickey Mouse.

Many experts think we have gone too far in prescribing pills. They argue that patients are over-medicated. As a doctor on the front lines, Iâ€™d have to give this opinion significant merit.

The ‘Poly-pharmacy’ of American patients is not new. I learned about the dangers of prescribing too many medicines back in the 1980s. Itâ€™s just way worse now. Thatâ€™s why I was drawn to this piece in the UKâ€™s Guardian. Dr. Corey Franklin provocatively calls our situation an “epidemic of over-prescribing.” He nicely lays out three possible factors:

If I was a professor of Medicine and not just a blogger, my bottom-line message would be simple:

Use the fury of medicine sparingly. Heck, you could even suggest a time out before e-prescribing a medicine.

Encourage patients to help themselves. Ask whether the slightly high blood pressure, blood sugar or pesky premature beats could be treated with simple and small choices. A pair of
sneakers is cheaper than the newest angiotensin-receptor blocker.

When I really dream, and not just talk with my imaginary friend, I often see doctors and educators and government and medical industry all working together to sayâ€”build communities where people can walk or ride a bike to school and work. I see a society where healthy behavior is normal and not an anomaly.