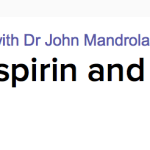 A recent study in the Journal of the American College of Cardiology shed more light on the commonly used drug combination of aspirin and a vitamin-K antagonist (such as warfarin).  It was a small registry study from one region of France but I believe it offered confirmatory evidence against this dangerous practice. Investigators followed patients […]