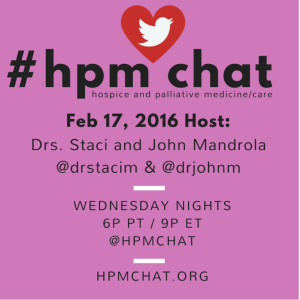 Tonight, February 17, at 2100 EST, Staci and I will host a Tweet Chat about cardiology and palliative care. It’s a great way for the general audience to learn from Staci. As a cardiologist married to a palliative care doctor, I get to know things that most cardiologists don’t know.

The one-hour session revolves around three questions that are outlined over at Pallimed.

Here are some of the details:

Go to www.hpmchat.org for up to date info.

Try using the search function on Twitter. If you do have a Twitter account, we recommend using tchat.io for ease of following. You can also check out the new site dedicated to #hpm chat – www.hpmchat.org

Paula Span of the New York Times has a great piece on the benefits of getting palliative care involved early.

If you are not on Twitter, you should be. It’s beautiful way to learn from and connect with people across the globe. Don’t listen to the preconceived notions about Twitter. In the healthcare realm, Twitter buzzes with smart thoughtful people. The other reason I like Twitter is that it hones short-writing skills.