I am proud to be part of the Lown Institute. Founded by Bernard Lown, a cardiologist, mentor, activist, and winner of the Nobel Peace Prize, the Lown Institute is an organization committed to making things right in the US healthcare system.

In case you wondered, yes, there is right and wrong in healthcare. At this point in my career, more than anything, I need to be on the right side of history.

The Lown Institute seeks the basics in a healthcare system. We think healthcare should be affordable, effective, rational and available to all.

This is hardly the case now in America.

Today, October 18th, begins Right Care Action Week. It’s a week when caregivers will take action to show patients that we have not forgotten what good medical care is. Lown suggests actions such as…

My action for this week will be to write about Right Care (and Wrong Care.) Words are the best way I know to affect change.

I had planned to start this week by highlighting something positive in the healthcare system. But then the NY Times published a terrible story of a trusted cardiologist who grossly overused his power. The headline said his actions scarred a small Indiana town.

This man broke the trust he had as a doctor. By doing so he not only hurt his patients, many of whom are now suing, he brought shame on his profession.

Yet the real story here runs deeper than one fraudulent man.

One of the worst aspects of this story is how powerless others were to stop it. Why that was (is) underscores a root problem with our system–the conflict between a healing culture and business culture.

This man’s colleagues knew something was amiss. They asked the hospital to stop the nonsense. The hospital did not, mainly because the overusing cardiologist brought them money and prestige.

This is a big problem playing out across hundreds of hospitals in the US. From the inside, it’s easy to see when doctors game the system. But short of obvious malfeasance, it’s risky to speak out. When overuse pays it’s easy for administration to dismiss criticism as sour grapes from competing specialists. What’s more, peers have difficulty criticizing wrong care because privacy limits review of charts.

The employed business model for physicians–where doctors are paid by productivity–exacerbates the conflict between good care and lucrative care. I made this slide and posted it on Twitter yesterday: 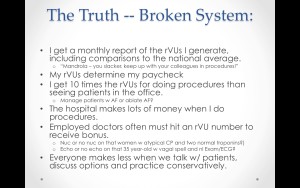 And, I stand against a system that favors more care over right care.

See you tomorrow. In the meantime, go join the Right Care Alliance. And speak up.