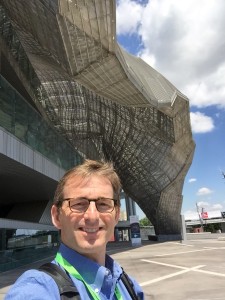 Selfie at the MiCo convention site

My favorite part of the congress, as it always is with medical meetings, was connecting with old friends, and making new friends. I had coffee, lunch or dinner with colleagues from Australia, Netherlands, France, Italy, Belgium, Frankfurt, Hamburg, Leipzig, Milan and the US.

You learn a lot from colleagues. Even after 20 years, it never gets old listening to others explain how they do this or that. I hope the Internet and social media does not render medical meetings extinct. In real life is different–better.

Here are the topics I wrote about for theHeart.org on Medscape.

Focal Impulse and Rotor Modulation (FIRM) is a novel way to approach AF ablation. The idea is to find and burn the rotors (think eye of a hurricane) that cause AF. The doctor places a basket catheter in the atria during AF. This basket has many electrodes, which record the waves of electricity. These signals are fed into a computer, and voila, the computer tells the operator, “burn here.”

The European perspective on FIRM ablation is one of strong skepticism. More than half of the EHRA program dealt with AF, but there were only a handful of presentations on FIRM. No Euro doctor I spoke with used a Topera rotor-finding system, or were they looking into getting one. That’s quite different from the US.

Here is my post on the stark differences of opinion:

The CARDIOFIT study, which was presented as a late-breaking clinical trial and simultaneously published in the Journal of the American College of Cardiology, was, by far, the most important study from EHRA.

In CARDIOFIT, the University of Adelaide research team studied whether fitness (or gains in fitness) would reduce AF burden or possibly add to the benefits of weight loss. More than 300 patients in their study group had before and after exercise stress tests–which are a fast and easy way to gauge fitness.

The results were remarkable (below are only a few highlights):

I was not the only one excited about this data. Trial discussant, Dr. Claudia Siklody (Germany), called the results “spectacular.”

You can read my entire commentary here:

Most every one agrees that electrical isolation of the muscle sleeves in and around the pulmonary veins is essential for AF ablation. The question is how best to accomplish this. The original way is to do point-to-point RF ablation. Another way to isolate the PVs is to use a cryoballoon. One freeze of a well-placed balloon makes a circular lesion around the veins.

Cryoballoon ablation began in Europe well before it did in the US. I can’t cite the statistics, but it seems cryo is more commonly done in Europe. All the European doctors I talked with did cryo. You see lots of cryo-related abstracts at EHRA–much more so than at American meetings, especially lately.

Right now, no one knows which technique is superior. All we have for evidence comparing the two strategies are single-center studies and non-randomized registries. The Fire and Ice trial is a multi-center randomized comparison of RF v Cryo. That study is finished recruiting patients and is currently in follow-up. It will be a biggie. 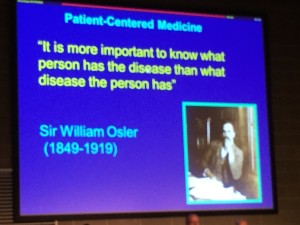 My favorite slide from the meeting — Love Osler

Recall that when we implanted an ICD the first time, we gambled. We took the risk that future device benefits would outweigh harms. That gamble changes—often for the worse—at the time of generator change. ICDs only prevent death from arrhythmia. When we age, biology dictates that organ function declines. When organ function declines, chronic diseases develop. In medical speak, we call this law of nature, “competing causes of mortality,” which lessons the benefit of an ICD. What’s more, the surgery to change an ICD generator is as high (or higher) a risk as putting in a new one.

You see the problem: older patients, more diseases, and significant surgical risks. A number of studies on this topic were presented at EHRA.

Here is my coverage of this important and growing dilemma.

Deborah Brauser is a new journalist at theheart.org on Medscape. She was also in Milan and has filed some nice reports from EHRA. There is an especially cool study on test-driving a pacemaker before getting a permanent one.

P.S.: Finally, if you ever visit Milan, the B and B Hello Milano provided outstanding accommodations. Perhaps the best I have had in Europe. Note that I grew up with an Italian grandmother next door–so I consider myself highly qualified to make that statement. It was lovely. Thanks Lorenza and Mary!