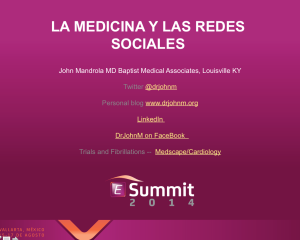 When Dr Eduardo Hernandez Castillo (@CardioLeaks) asked me to come to Mexico to speak with a group of physicians about the power of social media, I paused. Should I go to Mexico? I have been traveling a lot; it was a long trip; I was just starting to get fit again, and the atrial fibrillation/anticoagulation congress was industry-sponsored.

I wrote back to Eduardo about these reservations. He explained that there was a great need for education (of patients and doctors) in Mexico. Yes, it was true; Bristol-Myers Squibb and Pfizer, the makers of apixaban (Eliquis) were sponsors of the E-Summit 2014. But Eduardo said I would be speaking only of social media. Before deciding to accept, I contacted one of the other confirmed speakersâ€”a renowned Harvard researcher whom I have great respect. She wrote back to say she often goes to underserved areas because of the need for education.

As I write these words on the way home, I am glad I accepted the kind invitation. It was an honor to meet with more than 250 physician colleagues from Mexico. It was also humbling to share the stage with distinguished researchers from both the US and Mexico. Some people follow rock stars and athletes; I look up to people who are published in the New England Journal of Medicine.

Selfish not to engage online?

Perhaps it’s best to start this recap with a comment made to me (in private) after my talk. A Mexican physician said she thought it was selfish of physicians who were not online sharing their knowledge.

Wow. Now there is a bold statement. It is selfish not to share your knowledge on social media. That nugget got me thinking. And when I think, I often turn to the dictionary for clarity. Selfish is defined as being concerned chiefly or only with yourself, and your advantage, to the exclusion of others. The easy (fast-thinking or intuitive) retort to that statement is obvious: no, it is not correct, doctors are people and are free to share their knowledge and they are free not to.

But then I thought: where would I be without my teachers–mentors, both past and present, US and foreign, online and in real life, people who were generous enough to share their knowledge. Doctors depend on mentorship. Our modus is see one, do one, teach one.Â I have said before that one of the many cool things about being a doctor is associating with colleagues. The word camaraderie gets overused, but it fits how I feel about doctors. There is a bond, one formed in our training, and our failures, and our success. So, yes, maybe we have a duty to stick together, to help each other, as teammates would.

Okâ€¦Ok…maybe that all sounds a little soft. A cynic might say, yeah, right, Mandrola, you just scored a free trip to Puerto Vallarta on big-pharma. And if you think that, it is fine. May your cynical atria not fibrillate.

Mexico is a vast country with a 120 million people, 80% of whom are poor. Really poor, not American poor. More than one physician told me it is not uncommon for Mexicans to travel two days just to get an INR checked. Imagine that: a two-day trip for a blood test. (It puts into perspective the issue of veterans who live more than 40 miles from a VA hospital. One thing that travel teaches you is how much we take for granted in this country.)

Mexican physicians are also embroiled in political problems. One speaker wondered out loud what would happen if an authority would get AF. â€œThen this disease would get some needed attention.â€ This lack of attention to AF is a problem because Mexico is in the midst of an obesity epidemic. As you know, when obesity rates increase, so does AF, and with more AF comes more stroke and disability.

Another problem with treating AF in Mexico is fear. Mexican physicians, I learned, are fearful of bleeding and anticoagulation. Thatâ€™s a problem because a clot (necessary for life) and a thrombus (a clot that doesnâ€™t belong and causes disease) come from the same thing. Drugs that prevent thrombus formation also impair clot formation. You cannot have stroke prevention without an increased risk of bleeding. Registry surveys confirm that most AF patients in Mexico are either not on anticoagulants, or worse, on aspirin. The thrust of the meeting, therefore, was to emphasize the net benefit of stroke prevention with anticoagulation strategies.

Dr. Alexander Turpie, a distinguished professor from McMaster University, said in his talk, â€œeducation is keyâ€¦with education, we can overcome fear.â€ And not to be outdone in the category of Tweetable comments, conference chair, Professor Luis Molina (Mexico City) told the audience â€œsome of the consequences of AF were worse than death.â€ He was referring to how large embolic strokes rob people of that which makes them humanâ€”thought, speech, and mobility, for instance. Dr Molina confronted those critics who say newer therapies of AF are costly. â€œLife is expensive,â€ he said. (Neither of these guys are on Twitter, but with comments like these, they would be SM stars.)

After learning of these challenges in Mexico, I felt less out-of-place. Social media, after all, is indeed a powerful tool for spreading knowledge and fostering communication. When it was my turn to speakâ€”during the evening session right before dinnerâ€”I was motivated to promote the possibilities afforded from connecting people and ideas. I think the fact only a fraction of Mexicans use the Internet (compared with 87% of Americans) strengthens the argument for Mexican caregivers to stake a claim online. Early adopters surely benefit from being first. Look at me.

Besides the learningâ€”I filled many pages of a regular notebook with notes from the other speakersâ€”there were a number of beautiful moments. One of these came after my lecture. After a few questions from the audience, which were done with translators and those headphones you see at the UN, a handful of doctors came up to me with comments and questions. A cardiologist named Caesar noticed my Twitter background, so we talked about Mont Ventoux. A doctor named Carlos spoke of the importance of Telemedicine in echocardiography. He, too, wrote a blog and wished that more of his colleagues would use social media.

Then there was Tessa, a striking and tall 16-year-old young lady who was attending the session with her father, a cardiologist. She immediately said that I was correct about social media, and â€œwe [young people] know it.” â€œAre you on Twitter?â€ I asked. â€œYes, my mom says I can use it only to do good things.â€ We both agreed there were many good things to do on Twitter. Tessa wants to be a doctor. And based on what I saw, her immense poise and command of language, I have little doubt she will be successful. Thanks Tessa.

Another experience that will stick with me happened during one of the â€œrest periodsâ€ between sessions. I was invited to lunch with a group of twelve physicians. They had all trained together in Mexico City so this was a reunion of sorts. We went to a famous local place called Mariscos 8 Tostadas, an outdoor restaurant. We sat a long table and I was able to share clinical experiences with my neighbors, The iPhone has changed these international exchanges; now you can also share images of ECGs, echoes, cath films, and grandchildren. El Mich (@michermd) and I actually got in trouble (with his wife) for looking at our phones too much. (Grin.) 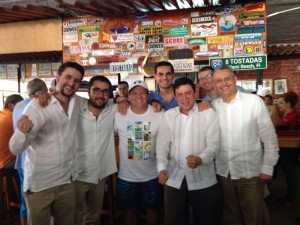 In the midst of lunch, the noisy restaurant became electric. A commotion began over at the bar. As if lunch with Mexican colleagues wasnâ€™t enough, it happened that Miguel (Piojo) Herrera came in for a beer. He’s the charismatic coach of the Mexican World Cup team. He seemed happy for the attention and was gracious enough to take a photo with our group and me. 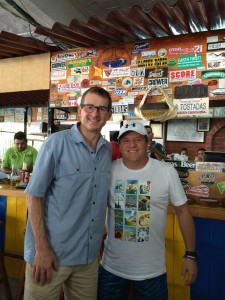 It was pretty cool seeing the excitement he brought to the people. Imagine if I had stayed in the room prepping for my talk. I would have missed this.

I finished my talk with a slide on who to follow on Twitter. The last bullet point read that they could follow me, and then we could connect from the US to Mexico.

6 replies on “Mexico congress recap — Is it selfish for doctors not to be on Social Media?”

Hi John, as a brazilian EP blogger, I would like to congratulate our fellow mexican physicians for this e-initiative and bring a few points for discussion:
1-The power of industry: yes, without the industry (devices & pharma) help, little can be done. The governments don’t have enough money to support scientific initiatives. The reasons are, well, beyond our discussion.
2-As you could feel, the power of transformation of e-health and social media in developing countries is even larger than in the US. Let`s keep in mind that in some geographical areas the access to smartphones is much easier than potable water !
3-As well as in the US, only a few doctors are aware of the importance of the online presence.
Well there are a lot of interesting observations but anyway, welcome to Latin America!
Regards

I am not a doctor so I’m uncertain that I could have a pertinent, valid opinion as to whether not being on social media is selfish for a doctor. I am, however, a patient, and one who has gone through having an arrhythmia and being treated successfully for it. I do, however hold the opinion that doctors who ARE on social media are indeed very unselfish. I am much more informed and knowledgeable about my condition, due in very large part to your sharing your knowledge, experience, and literature references via your blog. My purpose for writing this is to express how sincerely I appreciate your sharing.

It is mind-boggling how many people I have been able to reach in so many countries by expanding my teaching horizons on multiple forms of social media. By comparison to my early days in academics (circa 1980) – it took me years of publishing and traveling to forge a modest national reputation (with minimal to negligible impact internationally). Since “retiring” in 2010 – I’m now just one of many who has been read by several million in just a few short years of becoming active on social media. So YES there is an impact that clearly is invaluable to both the medical and lay community. That said – I never had time to participate in social media (let alone learn what you need to know to effectively participate) while I was in academics and seeing patients … So while it is truly laudable when clinicians teach superbly via social media (like John Mandrola does!) – I think it a little harsh to say overworked and overwhelmed clinicians with little time for anything else are “selfish” if they don’t expand to social media …

Dear John,
Let me tell you that it has been a real privilege meeting you. What a nice story you just told and I am certainly glad that you had such a great time down here in Puerto Vallarta, Mexico.
Have a great week!

Well is so funny read about “Carlos” (me, of course)….
The social media in MÃ©xico for doctors is for personal use in high percent, but is growing the use for share infromation and publicity. The problem is that the doctors whit high level influence dont use it. But i think is just time.
All the health sistems have problems, just ask president Obama (laugh), but like in MÃ©xico and all countrys the major problem is the peolpe who decide: who recive, how share and where install. The politics. And here we have very bad ones.
Dr. John Tks for you class in Puerto Vallarta, and i hope you visit my blogg and trie to write in espanish.