In recent years, progress in the field of cardiology has been painfully incremental. We have enjoyed small gains–a better ablation catheter and mapping system, a couple of new anti-platelet drugs, maybe better stents, and even the highly touted anticoagulant drugs are within 99% in efficacy and safety of warfarin. Major breakthroughs, though, are non-existent. (And please don’t tell me squishing valves in the frail elderly is a major advance.)

This absence of game-changing type progress has an explanation. Perhaps the answer will be obvious after I tell you about the most important medical study of the last decade.

Its title includes atrial fibrillation but it is much more than a rhythm study. 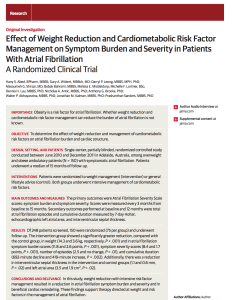 This is a trial of a novel treatment strategy for atrial fibrillation. Patients enrolled in the study were overweight Australians referred to an urban arrhythmia center in Adelaide for symptomatic AF. The researchers compared an intensive (physician-led) intervention approach to weight reduction and risk factor (high blood pressure, sleep apnea, alcohol intake, diabetes) management to the standard of care.

The study was born from two facts: One was that there is a long waiting list to get AF ablation in Australia. There was time. The second was that this group of researchers previously discovered (in a sheep model of obesity) that weight reduction had beneficial rhythm and structural effects on the heart. If it worked in sheep, it would likely work in humans, went the thinking.

Patients in the intervention group were referred to a specialized clinic (not an arrhythmia clinic) where a team worked with patients on basic health measures. This meant strict attention to calorie reduction for weight loss, including meal replacement if necessary. It also meant attention to blood pressure, sleep apnea, blood sugar control, lipid lowering and alcohol and smoking cessation. The control group also got excellent care; risk factors were treated and patients were given good advice on losing weight.

I know what you may be thinking: This does not sound like electrophysiology; it sounds like general internal medicine. And it is–and that is the point.

What makes this trial so important are the results–and the implications of the results.

The trial is free on the JAMA website, so you can read it yourself. There is also a 6-minute podcast with senior author, Professor Prash Sanders. Here are the study’s major findings:

Yes, it’s a small study from one center in Australia. But look at those findings; look past the AF reduction. Think big picture. Consider what these results say about the practice of medicine. It is so clear to me.

For my entire career, the default has been to treat risk factors and late manifestations of disease. We prescribe medication for high blood pressure and diabetes. We ablate the left atrium to treat sources of atrial fibrillation–the irony being that scar leads to AF and burns/freezes create scar. The reason we do all this treating is because we fail to see these diseases as unnecessary. We don’t think it is possible, or worse, we don’t trust people to make good choices. And this failing is mostly on us physicians.

These researchers have shown both doctors and patients that it is possible not to have lifestyle diseases. They have given us proof that, if you try hard enough, structural heart disease and blood vessel disease and insulin resistance may be reversed. The key word: motivation.

Here is where the skeptics come in. They point out that these sort of results are not possible in the real world. They say: in developed societies where food is abundant and technology makes life easy, weight loss is hard. Really hard.

One reason it’s so hard is because the medical establishment collectively gives in. Look at this Tweet from Dr Rajeev Pathak, one of the Australian researchers.

Respect, teach, and convince patients. These are our major roles as professional caregivers. To doctor is to teach. We aren’t just technicians and medication prescribers.

Respect. Teach. Convince. What makes this study so damn important is it that should change an entire way of thinking about treating people.

And now you can see why progress in cardiology has been incremental. It’s because there are no more antidotes to living so large.