Those of you who run or ride know what the second day back after a break feels like. The first day is awesome. The body is fresh and snappy; there is an adrenaline rush at the start. It’s easy to overcook it on Day 1.

Then there is me at the ACC on day 2. The loss of an hour (damn it, why do we mess with time?) plus the jet lag hit me hard. My mind was foggy most of the day. Anyways, here are a few highlights.

I started the day by going to a very general talk. Dr. Valentin Fuster, perhaps the true grandfather of the ACC, offered a view of Cardiology from the stars. With his beautiful Spanish accent and calm demeanor, it felt more like a spiritual pep rally. His look into future focused on the role of transforming heart cells with biological means. I was most drawn to his ending: He encouraged us to look at science and medicine with humility, but to remain motivated. “Life is a circle…If you keep trying, it will be amazing what you can do.”

I bounced across the hall to get to a talk on the novel anticoagulants. The one that struck me most was this look back at the Rocket-AF trial. It dealt with the important topic of what happens when interrupting anticoagulant therapy. This comes up literally every day: Can Mr Smith stop his anticoagulant for oral surgery, or back injections, or an endoscopy? The conclusion was that interrupting rivaroxaban looked similar to warfarin. The statistics here were complicated, but the take home was that we should minimize the time of interruption, and remain skeptical on the net benefits of bridging.

Still running, I got to the start of this study: Consistent doses of exercise are not associated with myocardial fibrosis. I won’t say much about it here, because later today I will have a post up at Trials and Fibrillations on the matter. Stay tuned for that.

Later in the morning, I went to set of oral presentations on AF ablation. To be honest, they were really not that exciting. One of the most aggressive centers on the planet offered more data supporting their aggression. A slightly notable abstract from a German center looked at the issue of silent brain lesions after ablation. It’s an important issue but not much was added to the knowledge base. The basics: silent white spots on MRI scans are common after invasive procedures, 98% of the time they resolve, no cognitive defects have been correlated, and limiting sheath exchanges is important. But we already knew that.

Next stop was the press room. I hunkered down over the computer, wolfed down free lunch and spent the next few hours writing the exercise and heart disease post. The press room is something. The concentration and focus are obvious. These are folks with a job to do. Picture the college library before final exams–only older folks. 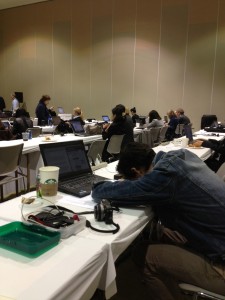 Here is my THO colleague Michael O’Riordan taking a quick snooze.

In the late afternoon, I focused on smartphone technology and the heart. Here is an abstract that featured a software program that can detect atrial fibrillation. Engineers from WPI– Worcester Polytechnic Institute (my Dad’s Alma mater) used cool things like entropy and chaos theory to distinguish the irregularity of the pulse. It’s very much in the discovery phase, but the draw is that placing a finger on a smartphone during symptoms might be able to auto-diagnose the rhythm. For the record, AF is labeled with a frowny face and sinus with a grin.

Speaking of smartphones, before heading to our theHeart.org meeting, I visited the AliveCor booth. Even in the late afternoon, the place was crowded. Dr Dave Albert told me the iPhone ECG was selling like crazy–and most importantly, an IPhone 5 version is coming soon. This technology is amazing.

Tomorrow is the last day. I plan to attend sessions on AF ablation and write about the possibility that (my) procedure will reduce the risk of stroke. I know it improves symptoms, quality of life and AF burden, but will it improve major long-term outcomes? I think yes, and I will tell you more later.

Also, head over to theHeart.org home page for the day’s recap.