At its core, this blog aims to do some good. I don’t like to ask for things. It’s not why I write.

Today is an exception. I’m going to ask you to learn about and maybe support an important cause.

The topic is sudden cardiac death–our number-one killer. There are a lot of folks working on this problem. But few are more passionate than those who have felt the tragedy of losing a child to sudden cardiac arrest.

Here’s a picture of me (at HRS 2012) with two mothers from the Sudden Arrhythmia Death Syndromes Foundation–each of whom has lost a child to sudden death. 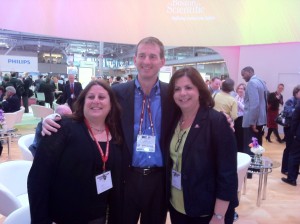 The opening scene was not quite this happy. Here’s how it went.

There I was enjoying a coffee in the booth of a defibrillator maker (full disclosure: the coffee was free), when three women came up to me and asked, “Are you Dr. John Mandrola?”

The initial sensations of pride–that someone actually recognized me–wore off in milliseconds. The next sensation was…uh-oh. Gulp.

I knew what was coming. A few weeks before the meeting, I had created a stir with a couple of posts (here and here) on why widespread ECG screening in the US would not be an effective way to prevent sudden cardiac death in young people. Numerous parents posted pictures of their dead kids on my Facebook page. I felt awful. It’s obvious that mothers’ who have lost kids to sudden death view the problem differently than an athletic doctor who bears witness to an epidemic of over-treatment and over-diagnosis of well people. There are few better examples of parallax–when the same problem looks differently depending on the viewpoint of the observer.

Here’s the thing about sudden death: Reasonable people, who share the same desire to prevent tragedy in young people, will disagree on the merits of widespread ECG screening. In fact, this month’s Heart Rhythm Journal features a point-counterpoint (For–Dr Sanjay Sharma and Against–Dr. Barry Maron) piece on the matter. Consider agreement on the merits of ECG screening as a mirage.

But there is one aspect of treating sudden death that we can all agree on:

The benefit of public education of early CPR and access to AEDs–Automatic External Defibrillator.

While at the European Society of Congress this August, I went to a session on sudden death in sport. A professor from France presented a study (great slides here) that showed how neighboring counties in France had widely disparate rates of sudden death. Regions with the lowest rate of death from cardiac arrest had instituted aggressive public education programs on the importance of early bystander intervention and had the greatest density of AEDs. The common denominator in all studies that look at sudden death is that early intervention with CPR and/or defibrillation improves outcomes. Here, there is near universal agreement.

Do me a favor. Take a minute to learn more about sudden death. Head over to the Sudden Arrhythmia Death Syndromes Foundation page.

You never know when you can give the gift of life to another.

Trust me. It will make you feel good.