On Fridays, especially stormy ones (when I canâ€™t ride), I like to reflect on the work of doctoring. Chief among such wide-angle views is how important a role we doctors actually play in creating good health for our patients? And the trouble that we may cause.

Iâ€™m struggling with this force pulling me toward minimalism. (Iâ€™m a heart doctor.)

Are we creating more disease than need be created?

Why do the risks of diagnosis and intervention look so much larger to me now?

Why do I so often see this: 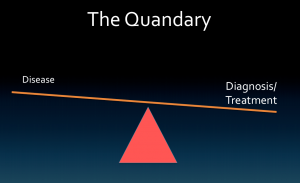 Take the example of doing nuclear stress tests for chest pain: it used to be these were ordered at the drop of a hat. We gotta know. Now, I canâ€™t help see the negative side of the test: a big slug of radiation that may lead to a heart cath and diagnosis of a partial blockageâ€”that would best be treated with diet, exercise and blood pressure control, not a stent. One way to look at this newly diagnosed patient is that we intervened early and possibly prevented a heart attack. Another is that we have created one more sick person and maybe intervened with a therapy that might not have been better than simple lifestyle changes. (Note: I’m not against doing nuclear stress tests or placing stents; these are potential life savers when used appropriately.)

Another example is doing anything to an elderly person. I used to see the potential to help the elderly live longer or better. I still see this, but now I also see the potential of mucking things up for them. And elderly people get mucked up a lot easier than younger ones. I saw the elders’ maladies; now I see their wellness. I grade them on a curve.

Finally, there is the thorny issue of a doctorâ€™s role in making people without an acute ailment well. Few essays have spoken to me as loudly as Dr. Gilbert Welchâ€™s recent NYTimes piece, If You Feel O.K., Maybe You Are O.K. His last paragraph hollered at me: (emphasis mine)

…For years now, people have been encouraged to look to medical care as the way to make them healthy. But thatâ€™s your job â€” you canâ€™t contract that out. Doctors might be able to help, but so might an author of a good cookbook, a personal trainer, a cleric or a good friend. We would all be better off if the medical system got a little closer to its original mission of helping sick patients, and let the healthy be.

And one such failure that haunts me is…

That my friends should be a never event!

11 replies on “Friday Reflection: The risks of looking and doing so much”

Another example is doing anything to an elderly person. I used to see the potential to help the elderly live longer or better. I still see this, but now I also see the potential of mucking things up for them. And elderly people get mucked up a lot easier than younger ones. I saw the elderâ€™s maladies; now I see their wellness. I grade them on a curve. —
One question. What is elderly?

And don’t forget that you are not that far behind.

But seriously I agree with the basic premiss.

Hope you avoided the tornadoes.

Your history and current situation, along with that of many others your age or older (up to a point), is a perfect example of how medicine needs to be tailored to the individual, not a predetermined demographic group. I know Dr. M. wouldn’t practice medicine as if he were marketing advertisements, but some docs seem to slip into stereotyping. Makes the teeth grind….

I’m *so* relieved to read an experienced doc’s thoughts on this matter. My own point of view â€” that in far too many cases, the intervention-oriented medical system and comparatively healthy people have become co-dependents â€” isn’t that popular with some of my co-workers (I include attendings, residents, and healthcare students in that group.)

Every day, sometimes BID or TID, people open their web browsers to find that yet another food or beverage or lifestyle practice has been declared to be bad for you. To me, this hyperabundance of info is a negative factor in life â€” especially since findings differ widely and frequently, and are often completely reversed in merely a few years (or a few months!) because researchers and media alike are in a rush to publish. Even if the intentions for that practice were always noble (yeah, right), it’s putting a very heavy psychological burden on people who are trying to do the right things for their bodies. Life is already filled with stress for many if not most; shouldn’t preventive care be aimed at limiting that? Yes, many people lead lives that beg the question of when CVD, metabolic syndrome, etc., will set in. But I keep hearing the voices of those who sit on an exam table as I do a PE: “It’s so much to keep up with, it just makes me want to throw in the towel.” At the very least, the HC practitioner should serve as a filter for all the fuss.

Adding in your perspective on much more specialized and complicated matters, a PCP might legitimately shake her head and ask, “Just what am I supposed to do for this patient?” I don’t want to punt on third down by just 1) handing out a bunch of leaflets that don’t address patients’ particular concerns, or 2) refer even a very slightly complicated patient to a specialist at the drop of a hat. Like you quoted, “That’s your job â€” you can’t contract that out.” Or my least favorite option, 3) write a script for a med or a procedure that will make a regular patient out of someone who’d be better off going to the gym (after getting cleared, if there’s a concern), or trying out some basic yoga at home … a million variations on that theme, some of them already noted in your quote.

Patient trust is a privilege, something to be earned, not assumed just because one is entitled to hand out scripts. Ultimately, the judicious balance of high/low/no intervention outside of listening and giving informed, compassionate feedback â€” thus giving hope and confidence and gaining trust â€” that might be the best medicine of all that one could hope to practice, thus regaining some of the faith that’s now being reassigned to less-effective care models… if not outright quackery. – Will end there lest I bring on another social-network jibe about typing up that novel I’ve always wanted to write. 😉

Thank you Anne. Your words are beautiful. I really appreciate that you wrote them.

Thank you for providing the forum! I had a blog before grad school…. it died peacefully, lol.

Doing too much… probably one of the main reasons our health care system is so much more expensive than European/Canadian systems but not demonstrably better. Let me see … I have a half a dozen patients who have had coronary stents placed in coronary arteries that are 50-70% blocked without any evidence that the blockage was causing problems simply because they were having chest pain. Their chest pain continued and they, understandably, sought second opinions. The blockage which was stable is now home to a thrombus-prone stent and they are mandated to take plavix. Part of this problem is “the man with a hammer sees everything as a nail” phenomeno, part financially driven. Thus, the interventional cardiologist sees a blockage and feels compelled to stent it, whether or not it is causing problems despite lack of any evidence that stenting prevents heart attacks. John, your fellow electrophysiologists make the same mistakes. I follow young patients who have had ablations for arrhythmias and who now suffer the consequences of complications such as severe aortic leakage or heart block (with subsequent pacemaker) for the rest of their lives. The desire to eradicate atrial fibrillation often leads EP docs down a path of recurring interventions that does not clearly improve the quality or length of life. I have had to counsel friends of mine to eschew an EP recommended pacemaker implant after they suffered vasovagal syncope following bowel prep for colonoscopy.
Inappropriate testing and procedures are a huge problem and I’m happy to see you discuss it.
Your old pal, Sonora

Your points about pacemakers are heard loud and clear. I could not agree more. Thanks for bring that one to light. It shocks me that it still happens.

My husband was coerced to get a pacemaker because, while having acute decompensated heart failure and not receiving adequate diuresis, he had episodes of breathing difficulties with bradycardia during sleep. On one night when they loaded him up with carvedilol, he also had a lengthy pause (they wanted to call a code on him, but he had already woken up). Only after he had signed a consent form did they double his Lasix dose over the weekend, during which he lost 16 pounds and the “bradycardia” disappeared. The notably dishonest resident actually denied to his face that it could be getting better. They also claimed that he’d have to have a pacemaker so he could take carvedilol.

I tried to talk him out of submitting to the procedure, given how many lies we’d been told, but he went through with it out of fear that if he did turn out to need it he’d be badly treated if he had been difficult. They implanted and programmed the device wrong, leading to intolerable arrhythmias and three more procedures that set back his recovery by several months. He still takes carvedilol with the pacemaker turned down as far as possible (to 30) to prevent pacing and with no bradycardia, though we’ll be trying to get him off it soon for other reasons. We also learned that for heart failure, there is no evidence that taking more carvedilol than causes bradycardia in an individual patient is beneficial.

It is impossible to get any allopath to explant one of these devices. Why, if you got one, you must NEED it. We were promised an explantation by one doctor but the rug was yanked out from under us. Now my husband faces substantial lifetime risks of further lead-induced arrhythmias, endocarditis, or tricuspid regurgitation leading to right-sided heart failure. The doctors claim that pacemakers are safe, actively misrepresenting the available literature, yet say that you need a lifetime of follow-up testing. I would advise anyone who is told he needs a pacemaker to get AT LEAST a second opinion, and try cutting or quitting any drug that could be causing your arrhythmias first. If there is any bright side for us it is that neither of us will ever be such a submissive fool again.

[…] who don’t want to recklessly spend money Â – Â Friday Reflection: The risks of looking and doing so much â€“ Dr. John […]