…it would be a good thing!

There are oodles of old rules in Cardiology. The provocateur in me loves it when dogma falls. 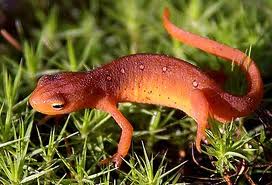 Niftier even, is when one can invoke the biology of newts to explain how yet another certainty was proven wrong.

As it turns out, those funny-looking mud-lovers possess a property that may revolutionize the treatment of heart disease. Unlike humans, newts can regrow damaged organs, including the heart! The newtâ€™s organs contain cells that arenâ€™t fully committed (biologists say terminally differentiated) to function.

Thatâ€™s different than humans. Our organs, the heart among them, once damaged, do not recover. In humans, scar tissue replaces dead cells and the organ is diminished. This is how heart attacks result in heart failure: non-contracting scar tissue replaces the blood-starved (infarcted) muscle. This leads to a weaker pump (congestive heart failure) and susceptibility to rhythm problems (sudden death). Sadly, this process takes only an hour or so to occur. Hence the rush in stenting open a blocked artery.

Millions of heart patients suffer from weak hearts due to heart muscle damage. Until recently, most doctors held to the old belief that self-renewal of heart muscle is impossible. All doctors can do is micro-manage medicines and maybe implant risky defibrillators. The heart remains weak, the patient limited. The wordâ€¦irreversibility.

Until recently that is.

New and emerging data reveals that our hearts may indeed have progenitor (stem) cells capable of growing into mature squeezing muscle cells. Call them, newt-like if you will.

Here goes the thinking: Unlike the newt, we humans canâ€™t signal heart stem cells to grow new muscle. But imagine if we could? Scar could be replaced with beating muscle, thereby restoring pump function. Heart attacks and heart muscle problems (cardiomyopathy), once thought permanently disabling, could be reversed like skin infections. Itâ€™s like a fantasy.

Stem cells? Yes. I think itâ€™s possible that cardiac stems cells may be the key that opens the treasure chest of the next generation of cardiac care. And how neat is it that my hometown, Louisville KY, happens to be at the epicenter of stem cell research?

Dr Roberto Bolli, a hard-working, self-made research scientist from Italy, who now chairs the Department of Cardiology at the University of Louisville has broken exciting new ground. His teamâ€™s work, published in the journal, Lancet, has brought new momentum to the dreamy possibility of using cardiac stem cells to regrow damaged heart muscle.

Hereâ€™s my brief synopsis of the Lancet study:

The U of L researchers enrolled patients with prior heart attacks and weakened hearts that were referred for bypass surgery. During surgery, a sample of the heart was cut out, sent to Boston where the cardiac stem cells were isolated. (This process involves serious biochemistry, above my pay grade; I like to think of the sample as being â€˜juicedâ€™ down to the stem cells.). At four months, time enough for improvement from bypass to have occurred, one group (16 patients) underwent heart cath where a balloon angioplasty catheter was used to infuse a syringe full of the patientâ€™s own (1 million) stem cells. The control group (7 patients) had standard bypass but no stem cell infusions.

The results were striking:

Compared to the control subjects who showed no improvement in heart function during the follow-up period (1 year), those who received stem cells sustained significant improvements in heart function, physical capacity and scored better on quality of life questionnaires. Most remarkably, ultrasound and MRI imaging revealed the areas where stem cells were infused showed the most improvement, and the enhanced squeezing function continued over the year. There were no safety issues with stem cell infusions.

These findings led the authors to conclude that cardiac stem cells induced regeneration of heart muscle.

I have to admit that my knee-jerk reaction tended towards naysaying. No way could this work, I thought. The study involved only 16 patients followed for only a year. Lots of limitations. Very preliminary.

But after spending a couple of hours reading about the biology of stem cells, Iâ€™m pretty excited about the Louisville research. For instance, I learned that injected stem cells might not have to en-graft themselves into the scar, rather they may signal the native heart to repair itself. Biologists call this a paracrine function.

Dr Bolli told our local paper that he has been besieged with letters from desperate patients with weakened hearts. Promising press reports on very early research tend to amplify hope. Rightly, Dr Bolli emphasizes the preliminary nature of this work. He adds that the SCIPIO study is ongoing and more data is forthcoming.

Itâ€™s surely way too early to speculate on whether this novel approach evolves into Cardiologyâ€™s Facebook or iPhone.

We will see. But let it be known that I am marking this post with a new category, â€œCardiac stem cells.â€ I’m keeping my eye on this exciting topic.

Put me down as optimistic and hopefulâ€¦the heart-healthy outlook.

Disclosure: I donâ€™t own Baxter stock.

This is beyond cool. Thanks for posting this.

I was reading an article the other day about a group of researchers who were using stem cells to try to cure LQTS1 and LQTS2. I thought Wow! Maybe if they can do that, they can figure it out for all the other types as well. This is amazing stuff.