Heart rhythm doctoring made news again. This time it was a WSJ report on CRTâ€”cardiac resynchronization therapy.

What is CRT? (Briefly) 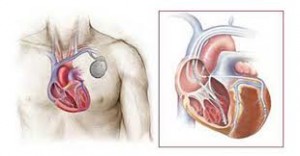 CRT devices, formerly known as bi-ventricular devices, involve placing an extra lead in a vein branch of the left ventricle at the time of pacemaker or ICD implantation. The extra lead allows the right and left pumping chambers to squeeze at the same time, like they do in normal hearts. Heart failure patients with weak heart muscle and delayed contraction of the left ventricle (left bundle branch block) often enjoy dramatic improvement with CRT.

But CRT has limitations: because the wires have no direct effect on the strength of the heart’s squeeze, it only helps patients whose chambers are not beating in synch. The more the dysynchrony– measured simply on the ECG–the greater the benefit of CRT. Some heart failure patients have this delay, and some do not; it’s a matter of chance.

There are three other relevant differences between a CRT device and a standard ICD: 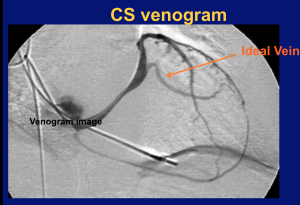 The recent (meta)-analysis–a pooling of prior clinical trials–focused on the well-known phenomenon of CRT non-responders. The mainstream media highlighted that one in three patients who had a CRT device implanted derived no benefit from it.

Here again, the headline was provocative. It inferred unnecessary and expensive devices are being implanted in unsuspecting patients for the benefit of industry and doctors. This isn’t the case.

May I add a little “real world” to the CRT story?

When a doctor tells me the story of a patient with shortness of breath, fluid build-up, impaired physical ability and a weak heart (Heart Failure), I know what’s coming next. They will likely ask me to implant a CRT device.

When the initial trials of CRT were first published, accompanied by their positive rhetoric, the “request” went:

“My patient (with a weak heart) is doing poorlyâ€¦He needs a CRT device.”

The enthusiasm for CRT gained steam because responders often emulate Lazarus. Patients that do well with bi-ventricular pacing shock you. It is amazing. “Super-responders” are transformed from heart failure patients to “normal” people, often overnight. In many cases, people enjoy complete normalization of heart function.

So it was hard to simply look at an ECG and say, “No…sorry…your breathless patient will not benefit.”

But like any newly-approved treatment, we (as a profession) learn more about the limitations and risks over time. In the case of CRT, it became evident that some patients did not derive any benefit.

The problem here is the gray area. (It’s always the gray area.) For instance, not all patients with a wide QRS respond, and not all with a 140-msec QRS fail to respond. Some patients burdened with scar do get better. And how sick is too sick?

These questions illustrate the role of sound clinical judgement. CRT-implanting doctors have to balance the treasure of a life-changing CRT response, with the risk of non-response. And we have to communicate this balance in a manner that each patient can understand.

“Sir…There is a 90% chance I can implant the LV lead, a 75% chance the lead will help you and a 50% chance it will make you feel great. But there is also a 2-5% chance of a complication, including serious things like painful shocks, blood-infection and a collapsed lung.”

This already complex scenario excludes the notion of costs. Doctors using CRT also have to be mindful of the high costs of these devices–to the patient, the hospital and the healthcare system as whole.

I think we can all agree that CRT decision-making is...not easy.

But to be fair, the limitations of CRT have become much better known lately. Keep in mind that many of the patients considered in this meta-analysis were enrolled years ago. It’s now far more common to hear this:

“My patient has a weak heart, symptoms of heart failure and an abnormal ECG. Do you think a CRT would help?”

The positive aspect of this seemingly negative analysis is that it adds to our knowledge base. Look-back studies like this one, however, are not entirely conclusive. They are, as smart people say–“hypothesis generating.”

To warrant changes in guidelines, which these days morph quickly into rigid mandates, we should require the rigor of prospective randomized controlled clinical trials. In other words, eliminating gray areas of medicine should demand sturdier science.

My worry about these highly publicized, but limited in scope, trials is that they might be used as another assault on the most cherished aspect of doctoringâ€”clinical judgement and the nuance of the doctor-patient relationship. It seems that when expensive devices are involved, there is little room for nuance. Only protocols, checklists, and mandates.

If only patients fit neatly into boxes.