I am in Boston for the annual Boston AF symposium. Itâ€™s a serious meeting– on the other side of the spectrum from old-school boondoggles like Echo-Hawaii or Nuclear-Vail. The sessions start at 7 and go into the night.

I am sneaking a few observations in during a coffee break. 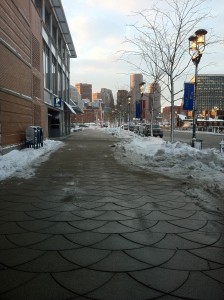 For starters, if snow removal is the metric, Boston gets high marks. Does anybody think a southern city would look like this twenty-four hours after a blizzard?

As has always been the case with this meeting, the sessions are fantastic. Many of the AF topics are highly focused, making the details of which beyond the scope of a coffee break blog update. That said, two observations on the tone of the meeting are worthy of commentâ€”especially since they are related to social media, and regular media.

The role of regular media: Without any doubt, industry involvement is either less, or just less overt. For instance, there used to be competing industry-sponsored evening sessions. Not any more. And I think that their absence is a negative. Sure, these were sponsored talks by paid opinion leaders, but we all knew about their inherent bias, and those of us who werenâ€™t moved by free pens were not moved by these talks either. It was nice to sit at a large dinner table with other clinicians and talk about cases in a less formal setting. This year, like other non-opinion leaders, the first night I ate dinner by myself with my iPhone.

The role of social media:The second way this meeting has changed is a sign of the times. Perhaps, social media has some negatives. Like in real life, attendees are more engaged with their mobile devices than other humans. In the lecture hall, people are texting, tweeting and computing. In the gathering hall, there are collisions of distracted walkers. At the round tables at lunch, folks eat like I did last night, with their mobile friend rather than a human friend.

Whether it is for the better or not remains to be seen.

5 replies on “Changes in the tone of medical meetings”

[…] This post was mentioned on Twitter by Franz Wiesbauer. Franz Wiesbauer said: Changes in the tone of medical meetings http://www.drjohnm.org/2011/01/media-changes-medical-meetings/ […]

Perhaps our carefully crafted digital networks are more interesting than our IRL connections.

But your point is well taken. I have concerns about the longevity of medical meetings.

I had to look up IRL…In real life.

Though the lectures were great, they would have been equally educational over the internet. But when in real life would any of us sit from 0700-1800 for three straight days if not for a meeting?

What would have been cool is if the audience could have twitter conversation after the lecture, and then the expert panel has an later session in which they address some key points brought up in the SM discussion.

With enough enlightened meeting organizers and attendees, social media might enhance rather than detract from the gathering.

Increasingly, I believe today’s doctors are learning in 140-character snippets of information rather than conventional lectures. Meetings still hold a place for socialization, networking, and detailed reviews, but is the time and expense to today’s productivity-ensnared doctors still worth it? The expense of these meetings in real dollars, from up-front travel, fees, and hotel/transportation costs, to lost caseloads at home, are quickly outweighing the benefits of a few good lectures to today’s doctors. Sad, really. But the times are changing: price pressures in medicine are increasing and will soon make online CME credits the norm. As a result, the social and professional isolation of doctor-employees bound by others’ rules will grow. What this will mean to tomorrow’s patients is still unknown, but I have to agree with Dr. V: the days of “sheltered workshops” are quickly coming to an end.

The succinctness and accuracy of that paragraph was very impressive.

I go to the Boston AF symposium because it makes me a better ablator–at least I think it does. And at this time in my career, I hang a lot of my self-worth on the electrophysiology peg. The famous ablationist, Dr Karl-Heinz Kuck brashly said that most doctors doing AF ablation don’t know what they are doing…“I wouldn’t have an AF-ablation in 90% of EP labs.” I would like him to be my judge, not some actuary with a spreadsheet, or perhaps even worse, a cubicle-doctor who couldn’t make it in the real world of doctoring.

Sadly though, as your witty adjective productivity-ensnared implies, is that honing our doctoring skills doesn’t change how we are compensated. Newly-employed doctors are now faced with the stark reality that their bottom line depends on the number of 93651s they do, rather than the skill with which they do them.

What this paradigm will mean to patients is indeed unknown, but the reformers who wish to engineer the system towards more equity and lower costs, to sameness, need to remember that since doctors are human, they are susceptible to human nature.