Do you see anything wrong with this picture? 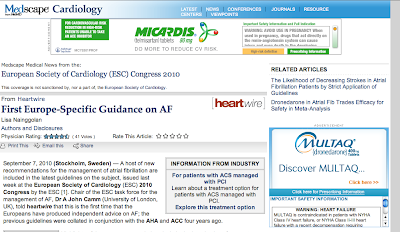 It is certainly true that atrial fibrillation management guidelines needed an update; the last comprehensive update was in 2006.  Much has changed in AF therapy, including the expanded role of catheter ablation and the soon-to-be warfarin substitutes.

I guess the European electrophysiologists couldn’t wait for us in North America.  They have published their own 54,000 word, “Euro-specific guidance on AF management.”

There are some neat new topics: a novel symptom score for AF, refinement of the CHADS2 scale for predicting stroke risk (in anticipation of new anticoagulants), and an expanded role of catheter ablation. All of these are welcome, fairly uncontroversial additions.

The more contentious issue is the role of “newer anti-arrhythmic agents.”

Well, that could only mean one thingâ€¦yes, you guessed itâ€¦dronedarone.

From Dr J Camm (a prominent British professor and a paid consultant for Sanofi), as quoted in a heart-wire article:

For rhythm control, the guidelines incorporate the new antiarrhythmic drug dronedarone, which was approved by the European Medicines Agency at the end of last year, into the recommendations. “We’re saying, from a benefit/risk point of view, that dronedarone is widely applicable,” said Camm.

There is ample dronedarone data in the literature. In treating AF, it is touted for its safety and its reduction of hospitalizations.  But not all the data is so flattering.  Especially, this less-than-striking data on its AF-suppession efficacy. The selective emphasis of dronedarone trials is chronicled here, on Cardiobrief.

The catch with dronedarone is that patients with symptomatic AF look to us to help relieve their symptoms. Favorable statistics are one thing, dronedarone researchers have plenty of data to publish articles, however in the real world, where AF patients consider their treatment successful when their AF stops, lack of AF-suppression is a challenging hurdle to overcome.

But they will try, with paid professors and banner ads on seemingly informational-only websites.

Dronedarone’s lack of efficacy will sort its self out with time. It will find its limited role. But until then, the banner ads and proclamations from the universities will likely continue.

I was taught in medical school; on entering a patient’s room, take in everything–the sights and smells, the family, the monitors and even the patient’s reading material.  Much can be learned from the background, the sidelines.  This is also good advice in reading information on the internet.  Take in everything, including a look to the right of the page to see who is paying to promulgate the information.