Is there a flawless medical therapy: a “wonder-drug” devoid of adverse effects, or a procedure without complications?

Of course not.
It’s why we have clinical trials.  An intervention for a disease is determined beneficial or not by a clinical trial–the new treatment versus no treatment, or the current treatment.  It really is that simple.
Few diseases are more diverse and widespread than atrial fibrillation.  It is true that in the current state of rapidly emerging approaches to AF, selecting the right treatment is like hitting a moving target.  What was right six months ago may be different now.
Yet, despite the many unknowns to be unraveled, there are a few certainties in treating AF.  Yes, certainty!
In patients with AF and at least one of the following risk factors: Age>75, high blood pressure, diabetes, heart failure, or previous stroke/TIA, the blood thinner warfarin (Coumadin) prevents strokes.  Period.  The data are clear.  The benefits of warfarin have been reproduced in thousands of patients enrolled in large-scale, multi-center trials, published many years ago.
But yet, all to frequently doctors still hear this from patients… (from a comment on an older post)

“I have had Atrial-fib off and on for 10 years now.I absolutely think Coumadin is terrible,the side effects read worse than the symptoms of Atrial-fib.There can be hemmoragic strokes from use of it, sometimes the pro-time readings do not correlate,i would feel like i am playing Russian roulette because Physcians say you need it all the while ignoring what might happen.Being a Christian, i trust the Lord and i cannot see Him endorsing rat poison being put in the bodies He created!I wonder how many doctors would use this “stuff”.I am not meaning to sound presumptious by stating the above, i just simply do not trust it!!!”

Yes, it is true that some patients experience adverse effects with warfarin.  As they do with any other proven effective drug.  And granted, warfarin is tricky to use effectively.  It requires good systems (an effective INR monitoring plan), as well as a motivated and educated patient.

Maybe so, but isn’t it also true that God made researchers who publish data such as thisâ€¦ 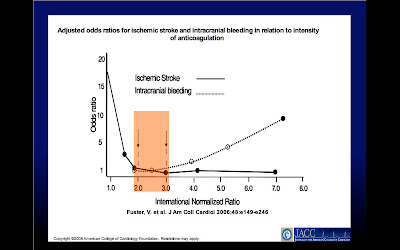 The orange block highlights the fact that when warfarin thins the blood appropriately, like Goldilocks: not too thin, not too thick, just right (INR between 2.0-3.0) the risk of intracranial bleeding is not increased.

It seems to me, God has a lot on her plate lately.  There are oil spills, wars, famine, injustice and the like.  My guess is she has delegated a bunch of well meaning, highly educated doctors to provide advice on specific medical therapies.

Don’t want drugs or surgery, it is simple, just don’t get any ailments.

Or, one can just live with the disease, like the caveman did.

4 replies on “Does God care that warfarin can have adverse effects?”

Thanks for that. I have had AF for 2 years, and have resisted taking warfarin despite my cardiologist's recommendations (I use low dose aspirin). You might just have convinced me to switch.

Interesting. God doesn't like warfarin. I guess He doesn't like insulin either. And just imagine what the thinks about adriamycin and cytoxin. Hey, if it wasn't for them, I could have gone home to be with Him instead of raising my daughter. Know any good faith healers?

I am a cyclist – have AF – and am on warfarin as i have developed blood clots in my heart. I have a great Dr with a good sense of humor. I told him that i have read about warfarin on th internet and don't think i want to take such a drug. I said: "It sounds nasty." He smiled and then asked me if i had read about strokes!!! So i take warfarin. No side effects. By the way i am a Pastor and am very comfortable that God wants me to take my Dr advice and save my life with warfarin.