But first, you may be wondering why I am using the funny word â€˜non-adherent.â€™ Itâ€™s because the older word, â€˜non-compliant,â€™ has fallen out of favor. Doctors used to say patients that did not follow a prescribed plan were not compliant. But this kind of harsh language implies a paternalistic condescending attitude towards the patient. Saying that a patient does not adhere indicates that doctor and patient are partners on equal terms. That sounds funny, doesnâ€™t it?

Donâ€™t worry, the story gets better. (Is it normal to laugh as you type?)

Being as we heart doctors are mindful and nurturing souls, we often describe patients that refuse to exercise, stop eating potato chips or fail to take medicines as directed as non-adherent. We donâ€™t take non-adherence personally, rather, we press on with upbeat positive reinforcement. “Keep fighting; you can do it; itâ€™s ok; I know itâ€™s really hard, and, of course you don’t eat very much,” are all things we say.

It turns out that not all doctors employ the cardiology approach to â€˜challengingâ€™ non-adherent patients.

Take my hand surgeon as an exampleâ€¦

Wait, what did you say, â€œyour hand surgeon?â€ 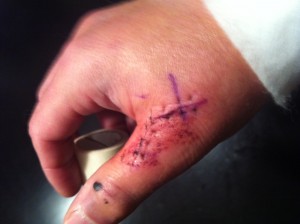 Yes, itâ€™s true. The ulnar collateral ligament and extensor pollicis longus tendon do not have infinite stretching properties. A brief side note: It was a nothing thing. A rock garden that I have ridden a thousand times. Sure it was a little wet. The front wheel turned on a wet rock. No problem; it wasnâ€™t at high-speed. But those rocks were so jagged, so uneven, so hard. I felt the tear. Dang it. My thumb was as we â€˜like to sayâ€™ in KY, severely caddywompus.

The shared decision-making went well. For me, surgery was the easy part. I just laid there and the doctors did the work. I read my own op note: â€œIn essence, it was torn open like a book.â€ Ouch.

After the repair, the surgeon put my hand in a hard splint and sent me home. The splint looked perfect; it was nicely wrapped, white and comfy. For the record, nowhere did it say I couldnâ€™t ride. I mean, who doesnâ€™t ride the trainer the nanosecond anesthesia wears off?

One thing easily taken for granted in non-casted, non-sutured folk is how easy it is to deal with sweat. You get in the shower and change the sweaty clothes. To me, and Iâ€™m sure to you, a partial splint implies that itâ€™s okay to change dressings and re-wrap. Come on, if you can ablate AF, surely you can change a splint.

â€œYes.â€ Not said, just thought…“I’m a heart specialist, and a bike racer!”

â€œIt got and hot and sweaty.â€ Again, not said, just thought…“Don’t y’all have moisture-wicking technical wrap?”

She did not call me non-compliant, but I knew she thought it. I got a new bandage and all seemed well. As I left, I planned my next trainer session. Iâ€™ll do repeat 5â€™s. Thatâ€™s what you would do on post-op day 3, right?

As I was seeing patients in the office the next day my iPhone buzzed an unfamiliar number. I answered–you never know, it might be the newspaper wanting an interview on medial blogging. â€œDr. (hand surgeon) wants you to come over to the office,â€ said the friendly but serious voice.

â€œMy incision check appointment isnâ€™t for a week,â€ I answered. â€œWait, crap, I missed another appointment.â€

Ever serious, the voice says, â€œNo, the doctor wants to see you this morning.â€

Sure I had patients. But my patients are used to waiting. Many of my cycling/AF patients have a blog to write anyways; they donâ€™t mind the peace and quiet of the exam room, as long as the Wi-Fi is working.

There was a chill in the office when I arrived. It was as if their faces could talk. Heâ€™s here; you know, the guy who took his splint off. Wait, let me see what he looks like. OMG. Thatâ€™s the guy. He was here yesterday. You should have seen it. The splint was a messâ€”sweaty and all. The wrap was so bad. He said heâ€™s a doctor, but geez, donâ€™t heart doctors know anything?

Now, Iâ€™ve never been in the presence of a hand surgeon before this week. I had only heard rumors. Supposedly they consider themselves apex-predator doctors too.

â€œTrying to heal thyself; I see,â€ the surgeon says as he looks down at my disheveled splint.

A shy office staff person then directs me to a large cast room. There were two toddlers with casts. They kept talking while I tried to read a review article in the Journal of the American College of Cardiology. It was hard to concentrate. My thumb throbbed. I waited. I read. I listened to the toddlers. My medical assistant texted me, â€œETA?.. the two cyclist/AF patients have finished their posts for today.”

I responded, â€œdunno, I think they are mad here…not sure they know what electrophysiology is.”

â€œWhat do you need?â€ asks the very mom-like woman. Flash-back to junior student OB-GYN rotation. A run of atrial tachycardia thumps my chest.

In cardiology mode, I say, â€œWell, should I tell my patients that are waiting for me to go home?â€

â€œYou need to sit down and let him put a cast on your arm.â€ 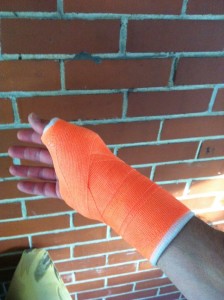 You ever see a dog with those collars over their noses? They keep shaking their head about and scratching at the thing with their paws. Thatâ€™s me with this damn cast. I keep wanting to shake it off. Not only canâ€™t I ride, or sweat; the worst part is not being able to hit the space bar. I am back to pecking out blogs.

20 replies on “CW: A hand surgeonâ€™s view of non-adherent patientsâ€¦”

So glad you can keep your sense of humor through this (If you didn’t – you might cry). ALL the BEST – and hoping your cast will soon be off and your hand healed.

P.S. Could stop laughing as I read this post.

Meant to say could NOT stop laughing reading your post ….

This is one of my favorites!! Hahaaa. The cast has to be better than that bulky sling.

Thanks. The cast may be worse.

I could have warned you.

I did the same – got on the trainer after a few days and got the whole thing wet – but since I am NOT a doctor, I was too afraid to remove it afterwards and suffered through 6 hours of miserably cold drying (in winter). Yuk.

The next 2 weeks were spent walking. Then I got a spare splint and was allowed to switch-out for the next 4 weeks.

Can’t they just go through the groin and ablate the hand?

That was funny! Glad you can keep your humor through all this. Kk was very worried about you. Good blog

Tell Kk, I’ll be out there soon.

Heart doctors could do this, but then you would have to co-op with weight watchers and a gym of some sort and keep track of daily intake/output as well as pounds lifted, % of max heart rate reached and for how long every day. But I suppose you already knew that.

After all of your preaching prevention I as surprised at you.

What do you think that you did to the hand surgeon’s blood pressure.

The next time use your head. Go to urgent care at Walgreen’s.

BTW, I think that this is the surgeon’s blog.

I think you already do have casts for your line of work: the rib cage. Could you imagine if your work were as accessible as the hand?

“… Never been in the presence of a hand surgeon.” Really?

You are like me on a bike, so quiet and unassuming. Heck, people forget you are a doctor. I know now.

Thanks for the note. As far as protecting the heart, I wasn’t thinking physical barriers from blunt trauma. Rather, I wears thinking about more upstream, where inflammatory calories are ingested.

Glad I read this blog…I LOLed on multiple occasions.
You can take the dogs on a walk instead of riding, less sweat and more bonding time 🙂

Great read John,
Reminds me of my surgeon friend that broke his wrist last fall, no pun interned, in Tahoe. Had to walk out 6 miles, not before having his Dentist and Urologist friends set it for him. Only to have it reset by the ER doctor then a surgery upon returning home.
I know there is a joke in that scenario somewhere, you know, A Surgeon, a Dentist and a Urologist Walk into the emergency room……

This was very entertaining & funny. I read medical blogs to be a well informed better patient, this one made me laugh! Thanks for the clarification…I will now refer to myself an an adherent patient rather than a compliant patient. I too had hand surgery, and although I’m not a physician, a hand is very important. My left dominant hand was in a cast/wrap/immobilized for an entire summer, with only the tips of fingers visible. I had to learn to write with my right hand, change my mousing skills to my right hand, change my mode of dress because of one hand use, all while continuing to work…but worst of all, trying to sail with one hand, and not fall off the boat into Lake Michigan. Love my hand surgeon, but love my cardiologist more!

Such an entertaining story!

Great read, John. I can identify, but even a cast isn’t idiot proof. I had one on my ankle after tendon surgery and once I tried it out on the stationary bike, I had to get back on the road. So, unable to attach a cleat to the bottom of my cast, I found a pedal with leather strap and cage which would accept the cast. I had a couple of good rides…until my wife found out, then it was back to the stationary bike. Later my surgeon found me hammering away on the stationary bike at the gym with sweat pouring off, and he just walked away muttering something about the cast being pretty ripe by the time it came off in another month or so.