This Wednesday, I’d like to talk about how rodents, relationships, and riding relate to intelligence and overall wellness.

That combo caught my eye. 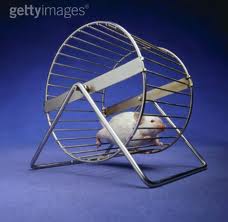 Anyone who pays attention to wellness knows that exercise produces more flexible arteries, more durable hearts and leaner body shapes.Â  These benefits are obvious, and honestly, sometimes a bit tiresome to write about.

To me, a far more interesting–and lesser known–benefit of regular exercise is that it might make us smarter.

Here’s where the rodents come into the story.Â  As was summarized in the NY Times piece, when researchers allowed rats and mice access to running wheels they observed (a) that they all ran, and (b) those rats that did run scored better on rodent IQ tests, and actually grew more brain cells.Â  This is a striking finding because nerve cells–unlike blood, GI and skin cells, which turnover rapidly–grow very slowly, if at all.

But that’s not the entire story.

The Princeton researchers wanted to know whether the rat’s social relationships could have measurable biologic effects.

It turns out that rodentsâ€”like humansâ€”are quite social.Â  So social in fact, that in these trials the brain-growing effect of exercise was blunted when rodents lived alone.Â  Compared to rats and mice that lived in groups, those that were kept in isolation failed to grow new nerve cells in response to exercise.Â  And, importantly, isolated rats produced higher levels of stress hormones than those who lived in groups, even though both groups ran the same distance.

Though the precise way that loneliness blunts the brain-boosting benefit of exercise is not known, it’s reasonable to speculate that the inflammation-lowering effects of exercise gets countered by the stress of isolation.

Obviously, humans are far more complicated creatures than rodents.Â Â  Unlike our four-legged relatives, we humans don’t just hop on exercise wheels simply because they are available.Â  If we did, there wouldn’t be an obesity epidemic.

This distinctly human decision of whether to partake in regular exercise was the subject of another of Ms Reynold’s cited studies.Â  In this 8000 patient human exercise study, researchers from the famed Cooper Clinic in Texas provocatively suggested that marriage may worsen physical fitness.Â  They reported that single women who stayed single retained more fitness than those who married.Â  And recently divorced men reaped the largest gains in fitness.Â  These findings come as no surprise to competitive cyclists. There’s nothing like a good marriage to slow down a cycling cyborg.

All this science speaks to me at four levels:

As a heart doctor, I hear the message that healthy relationships foster wellness, and this benefit is likely mediated by lower levels of stress.Â  I witness this everyday, and it’s comforting when science confirms the observed.

As a fan of education, I find it striking that in the face of mounting evidence that regular exercise boosts brain power schools are curtailing regular gym classes.Â  Hello.

As a regular exerciser, I like the idea that my habit might make me smarter.Â  Too bad spinning that bike wheel didn’t make sentences flow any smoother.

As a bike racer, I love it when one of my more talented competitors gets married, and stays married.

One reply on “Cycling Wednesday: The Three Rs”