And free of calories. 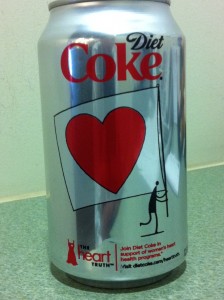 So what’s not to like about diet soft drinks?

The ongoing debate about the healthiness of diet soft drinks reminds me of the old-adage, if something sounds to be true, it probably is.

Artificially-sweetened “diet” drinks get touted as healthy alternatives to sugary drinks because they contain no calories or carbohydrates.Â  On paper, it seems plausible to think they are inert, no more dangerous than water. Â Coca Cola corporation sublimely strengthens this assertion by putting a big red heart on the Diet Coke can.

But this week’s diet-cola news presented at an International stroke conference suggests otherwise.Â  This widely publicized observational study of 2500 older patients (average age=69)Â from New York showed that drinking diet soda on a daily basis increased the risk of having a heart attack or stroke by 61%.Â  The abstract–not a peer-reviewed study–stated that this association persisted after controlling for other pertinent variables.

Sure this is only a look back at 559 patients who had a vascular event.Â  The study asserts only an association, not that diet colas cause heart attacks and strokes.Â  That’s a big difference.

That said, however, I don’t view these results as trivial either. Â This trial builds on the results of prior studies of diet drinks which strongly suggest that, despite their lack of calories, they don’t prevent obesity.

My take on diet drinks are that they are junk food. Â It isn’t just the science, it’s the common sense: nothing that is artificially-colored, artificially sweetened and packaged in aluminum is good for you.Â  Even the supermarkets agree; they display soda right next to the chips and cookies.

That’s why I find the views of a prestigious stroke doctor so disturbing.Â  The vice chair of the stroke meeting, Dr Steven Goldberg (Massachusetts General Hospital) advised patients to focus on a healthy diet and exercise before they consider cutting back on soda consumption. He adds, “people shouldn’t rush to stop consuming diet soft drinks.”

I hope he was misquoted. Â How dumb would the above sentence have sounded if the words Fritos or Twinkies were substituted for diet soft drinks?

To me, minimizing the consumption of junk food is at the crux of a healthy diet.

Thus, when a medical leader is given the bully-pulpit it seems to me they should aggressively advocate for the total package of better health.

[…] This post was mentioned on Twitter by StopAfib.org, Safan Momin. Safan Momin said: RT @drjohnm: Sure the (recent) science on diet soft drinks is soft, but make no mistake: they ain't healthy.http://ow.ly/3V0rE […]

In the immortal words of Joan Collins: “I never drink diet sodas – because you never see thin people drinking them.”

I wonder if Ms. Collins’ observation might actually be more of a factor in the New York study’s conclusions than any definitive link between diet drinks and heart disease. Correlation, as you say, does not equal causation.

It isn’t so much that diet soda isn’t a poor nutritional choice. Of course it is. But it may more likely be that the realistic alternative beverage for these 2,500 older, at-risk subjects (who drink a diet soda EVERY DAY) is likely to be a regular sweetened soda every day, not a more healthy option like plain water or herbal tea. For many, I’d guess that those with diabetes are unlikely in fact to ever consume a soda that is NOT diet.

In a perfect world, these subjects (and all of us) would avoid all junk food at all times.

For the rest, their personal preference might be to avoid consuming the 150 calories and “white death” sugar in regular soda drinks, ranging from about nine teaspoons of sugar per can of Coke to a whopping 19 teaspoons in Mountain Dew. Even healthy unsweetened fruit juice contains the serving equivalent of eight teaspoons of sugar (orange juice) or 15 teaspoons (grape juice).

Medical leaders can “aggressively advocate” all they want about the need to stop consuming junk foods like diet soda, but for these 2,500 older study subjects, their belief may actually be that this is indeed a “healthier” alternative to what they really want – which is real Coke!

And if you’re talking about the “obesity epidemic”, these patients no doubt feel like they ARE on the right track with their 0-calorie sodas. My impression of Dr. Goldberg’s comments were not so much that they are “dumb” – more like realistic.

Thanks for such a thoughtful and clearly written comment.

Your point is well-taken.

The problem I have is the height of the bar that our “thought leaders” choose to set. As a budding of master of the obvious, I understand the comparative harm argument. And I also know that few (legal) things stimulate the cannabinoid receptors like an ice-cold Coke on a hot summer day–especially after a hard-fought bike race.

Cardiologists, especially procedural ones that primarily fix problems after they occur, tend to give healthy-living only lip-service. I believe that we should set the bar higher. Sure, have a Coke after you exercise once in a while, or splurge with a small bag of M and M’s on occasion. But regularly substituting a ‘D-‘ food (Diet cola) with an ‘F’- food (high-fructose sweetened drink) is a habit that heart leaders should vigorously oppose.

By the way, I loved your site: http://myheartsisters.org/