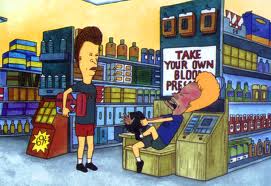 You ride a lot.

So you rightfully call yourself athletic.

Now, take the time in the off-season to go get your blood pressure checked.

Doing so is free in most grocery stores and pharmacies.Â  Plus, you get to grin at that funny voice that says:Â  “You must hold perfectly stillâ€¦Do not move or talk during the testâ€¦I have to squeeze your arm a little.” (I can’t help myself; I always talk during the test.)

Don’t assume the red numbers will come up reassuring.

Here are some basic steps to take for newly discovered high blood pressure:

If all these conservative measures fail and the blood pressure remains high a medicine might be required.

The problem is that if your doctor treats your high blood pressure according to national guidelines this may mean taking the commonly used water pill, hydrochlorothiazide (HCTZ).Â  Ouch.Â  That’s a problem.

I suggest gently asking your doctor about the findings of this week’s important high blood pressure trial published in the Journal of the American College of Cardiology. In this meta-analysis (a review of previous studies), the researchers at Columbia University showed thatâ€”at the doses commonly used, and when used aloneâ€”HCTZ was the least effective blood pressure medicine.

The strength of this report stemmed from the inclusion of 24-hour BP monitors.Â  Interestingly, when single BP readings from doctor’s offices were considered, HCTZ looked reasonable, but on the more accurate 24-hour recordings it was significantly inferior to other commonly used BP medicines.

I’m glad to see this data because it supports my common-sense bias that water pillsâ€”when used aloneâ€”are lousy BP medicines.Â  They lower BP by increasing the elimination of fluids and electrolytes. That’s the paradox, their primary effect causes their most common side-effect: dehydration and electrolyte depletionâ€”something most of us athletes try to avoid.

What’s more, heart rhythm doctors were brought up on the teachings from the famous 1982 MRFIT BP trial in which the highest mortality rates were found in the group of men with high blood pressure who were treated with HCTZ.Â  The presumption here was that low potassium levels from the diuretic increased the risk of sudden death from a rhythm problem.

For endurance athletes with high blood pressure, the most common problem is inflexible arteries, not excess salt and water. So it makes sense to use a medicine that acts on the primary problem; we call these blood-vessel relaxers, or vasodilators.Â  Examples include ACE-inhibitors, ARBs, and some Calcium channel blockers.

If you train hard, eat right, and still need a BP pill, it seems reasonable to ask your doctor to question the guidelines.

Maybe the guidelines are wrong?

Oops, can I say that?

When my blood pressure warrants a medicine, I’ll start with a blood-vessel dilator, not a diuretic.Â  Unless of course there is a new wonder drug available, and I can afford it.

Just because thiazide diuretics aren’t very potent when used alone, they can be very useful as add-on agents when a single medicine fails to control BP.Â  That’s doctoring 201.