(This post introduces my latest column on TheHeart.org | Medscape Cardiology. It’s about stroke in young people.)Â

We define stroke as the death of brain cells. The typical cause is a blocked blood vessel in the brain. Stroke usually occurs in older people who have established blood vessel disease. Stroke is bad; it may be the worst outcome in all of medicine. That’s because stroke can permanently remove basic functions of being human, things such as speech, thought, personality, movement, swallowing, and many others.

Stroke is not supposed to happen in young people. But sometimes it does. And in some of these cases, the cause may be due to a hole in the heart or patent foramen ovale (PFO). This membrane of sorts can allow blood to flow across the right and left atrium. 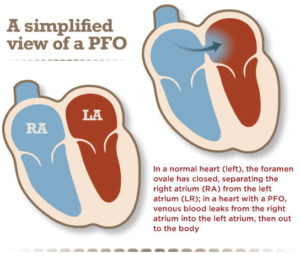 What experts think happens in PFO-related stroke is that a clot from the venous system (say, from prolonged sitting or some other reason) travels from the right atrium across the PFO into the left atrium. That’s bad because LA clot goes to the left ventricle and gets pumped out into the body to lodge somewhere. (Since it is a straight shot from heart to brain, clots in the heart usually lodge in the brain.)

But get this: about one in four humans have a PFO. Please read that again. One in four. So it’s completely normal to have a PFO. I see this all the time when doing AF ablations. Sometimes the catheter goes right across the membrane without help from the needle.

The tricky question, therefore, is what to do about a young person–with a PFO–who presents with a stroke and no other obvious cause is found. No vascular disease; no AF, no evidence of abnormally thick blood. Nothing. Just the PFO.

Was the PFO the cause of the stroke or was it incidental–remember, PFO occurs in one in four people.

One idea for treatment is to place a device used to plug much larger holes in the heart (called atrial septal defects) to plug the PFO. Then if the connection is blocked no clots could get from the veins to the arterial side.

The other way to prevent venous clots from causing strokes is to use clot-blocking drugs, such as aspirin or warfarin or the new anticoagulant drugs called NOACs.

These are two different strategies: one is mechanical blockage and the other is medical inhibition of clots forming in the first place.

Three recent studies published in the NEJM compared PFO-closure to clot-blocking drugs in young people with stroke of unknown cause. All three studies showed favorable results for PFO closure. This was a reversal of sorts, as three previous studies on this question had been negative.

The title of my column isÂ Positive Results for PFO Closure Come With Caveats. (You need to give an email to read this.)

In this piece, which is written for a medical audience, I introduce the background, summarize the three NEJM papers, compare the new PFO studies to the old ones, and then offer comments on how to translate this evidence to the care of younger people with stroke.

The take home is this:

If a person with a stroke has a large PFO that can shunt blood from right to left (often, this can be seen during an echo) and a thorough search for other causes of stroke comes up negative, then it’s reasonable to discuss closure.

But … even though the trials were positive, this is a hard decision. Why?

Two reasons are that the differences between PFO closure and drug therapy were tiny–in the range of a few percent or less. Â AndÂ the procedure comes with the risk of serious harm, about 2-6%.

The biggest uncertainty, however, was the comparison to aspirin. Yes, in the three trials, the closure device was better than aspirin, but everyone knows aspirin is lousy therapy for clots in the venous system. When people have venous clots (sometimes called DVT or deep venous thrombosis or VTE, ie venous thromboembolism), doctors choose drugs that block coagulation, such as warfarin or the NOACs.

In the end, I don’t know the right answer. I often think: what would I do if it were me? Would I have a foreign body put in my heart, or, would I take an anticoagulant drug? I am not sure.

The key here will be slow decision-making. Patients will need doctors to go over the nuances of both choices. It’s not a simple call.