We have to talk about drugs.

No, not illicit drugs, but medications used by doctors and patients.

Plaintiff attorneys run ads on TV that fool people into thinking certain meds are bad. The current one I deal with is the clot-blocking drug rivaroxaban (Xarelto.) Before that, it was dabigatran (Pradaxa). If, or when, the makers of rivaroxaban settle a class action suit, you can bet apixaban (Eliquis) will be next.

These ads are a problem because they use fear persuasion (see Scott Adamsâ€™ blog), and because they can induce patients to stop taking or not start a beneficial medicine.

Lots of other medications suffer from a â€œbadâ€ or â€œtoxicâ€ branding. Some people think statins are bad; many people think amiodarone is toxic. Warfarin (Coumadin) still suffers from the branding of rat poison.

Toxicity turns mostly on dose. (Chance can also play a role in toxicity.)

Warfarin kills rats because the rodents keep eating the pellets and the drug builds up to high doses. In humans, we adjust the dose.

When patients tell me certain medications are toxic, I remind them that too much water, taken by endurance athletes, can cause dangerously low sodium levels that may lead to seizures. Oxygen given at high doses for too long in patients on ventilators can damage the lungs. Life saving-antibiotics can cause life-threatening colon infections.

I would urge doctors and patients to frame medications with the big four questions: 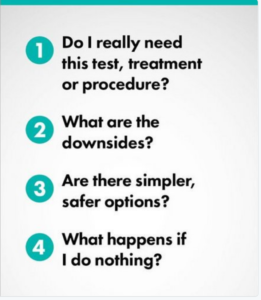 As an exercise, letâ€™s apply the four questions to the statin drugs (we exclude from this discussion people with familial hypercholesterolemia):

What are the benefits of taking statins?

The benefit of statins, therefore, is a probabilistic one. Itâ€™s like a lottery. You take the pill every day in hopes it will prevent a serious cardiac event in the future.

In absolute terms, the degree of statin benefit depends on whether a person has had a cardiac event.

For those without a previous heart attack, stent, bypass or stroke, statin benefits are smallâ€”no mortality benefit and about a 1% reduction of nonfatal cardiac events over the next 5 years. Doctors call this primary prevention.

For people with a history of a cardiac event or stroke due to a blockage of some sort, statin benefits are greaterâ€”about a 1.2% lower risk of dying and 2.5-3% lower risk of a non-fatal heart attack over the next 5 years. Doctors call this secondary prevention.

What are the harms of statins?

The best known harm of statins are muscle issues. I use the word issues rather than damage because true muscle damage is rareâ€”about 5 in 10,000.

The actual frequency of muscle symptoms is hotly debated. Randomized controlled trials (in which patients donâ€™t know whether they are taking the statin or placebo) report very small increases in muscle complaintsâ€”about a 1-2% increase. Observational studies, however, reveal higher rates of statin muscle complaintsâ€”in the range of 10-20%.

The second potential harm of statins is a small increase in diabetes. One of the smartest doctors on the Internet, Dr. Richard Lehman, says “the issue of [statin] induced type 2 diabetes is just an artifact of the way we define the threshold for T2DM. Statins often cause a small rise in blood sugar, which would only be of significance if it was associated with an increase in macrovascular or microvascular disease. On the contrary, statins reduce macrovascular disease end-points, and there is no evidence to suggest that they increase eye or kidney microvascular disease (which are very rare in the glucose range we are talking about).â€

Another possible (emphasis here on possible) harm of statins is that the drugs may interact in a negative way with lifestyle. In a 2014 theheart.org | Medscape Cardiology column that went a bit viral (647 comments), I cited two observational studies, one that reported a higher calorie intake of statin users and the other less physical activity in male statin users.

Are there simpler safer options?

Eating modest amounts of real food, not processed food in packages, doing regular exercise and managing stress would likely deliver lots of probabilistic benefits for reducing the odds of having heart disease.

This â€œinterventionâ€ however, has not been compared to statins in randomized controlled trials. Cardiologists Aseem Malhotra, Rita Redberg and Pascal Meier, writing in the British Journal of Sports Medicine, point to the obvious reason for this: â€œThere is no business model or market to help spread this simple yet powerful intervention.â€

What happens if I do nothing?

The most likely outcome of not taking statins is the same as if you take oneâ€”nothing. In the best case, that of secondary prevention, the risk reduction for nonfatal cardiac events is about 2.5-3%. That means one has to treat about 39 patients for five years to prevent one event. The odds are you would be in the 38 of 39 category, but you donâ€™t know.

Doctors think this is a good trade. If these stats are applied to populations, many heart attacks can be prevented.

The ultimate decision is up to you. You are not a population.

You can do this exercise for any medical intervention or medication. Why we don’t do it more often is hard for me to understand.