Itâ€™s well known that the new blood thinner, dabigatran (Pradaxa) can cause stomach pain and reflux symptoms. It occurs in slightly more than one in ten patients who start the drug.

Yesterday, I learned of another potential gastrointestinal adverse effect of the new drug.

A GI colleague called me about a patient taking dabigatran (Pradaxa) that had developed â€œpill esophagitis.â€ He added that his colleagues had seen a number of cases of this particularly distressing condition with the new blood thinner.

As this was new information to me, I thought passing it along might be helpful. I Googled it and spoke with other heart doctors and have not yet seen anything written on this matter. Could this be a first?

What is pill esophagitis? 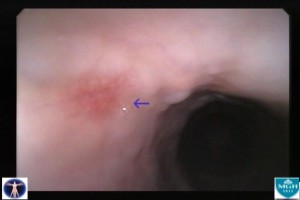 Hereâ€™s a heart doctorâ€™s explanation: Itâ€™s well known that medicines can irritate the lining of the esophagus, mostly by increasing reflux of stomach acid into the esophagus. We call these actions systemic. But another way pills can irritate the esophagus is by local irritation. If the pill gets stuck or simply does not move through (down) the esophagus, it can cause severe local inflammation. This intense and focused inflammation can cause severe symptoms, chest pain, swallowing pain and even perforation requiring surgery. Pill esophagitis is not Mickey Mouse. Historically, tetracycline antibiotics, NSAIDs and the biphosphanates have been the most frequent offenders.

His suggestions were useful.

We are learning together about these novel and new drugs. I’m just passing on what I have learned. Hope it helps.