The implantable cardiac defibrillator (ICD) is a life saving therapy. But, like any medical treatment there are potential adverse effects.

With ICDs, we are trying to prevent thisâ€¦(a slide from the 1980s) 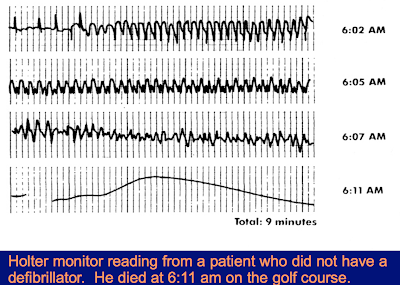 But in doing so we sometimes get this…

Which is supposed to look like thisâ€¦(same patient–hours later, with no intervention)

ICDs have been likened to having a paramedic in one’s chest; ready to defibrillate at a moments notice, automatically.

Some have even gone so far as calling ICDs “insurance policies.”
But it bears emphasis that unlike holders of insurance policies, ICDs confer risk.  Not just the risk of surgical implantation, but an ongoing risk each and every day.
Like the risk of receiving an inappropriate shock.  A shock, because the ICD mistakenly thinks the heart is beating too rapidly.
The above referenced ICD recordings are from a patient who has had an ICD for years. It was placed for a chronic and unusual (but not rare) cardiac condition known for its intermittent flares of life-threatnening arrhythmia.
Her rhythm had been stable for many months.  The home monitor recorded no evidence of “mini” episodes nor any hardware issues. The device was not on recall.  She was seen a month ago and all cardiac measures were stable.
But yet, without warning, nor any other symptoms she received 4 extremely painful ICD shocks.  The t-wave, the electrical representation of cardiac relaxation, enlarged to the point where the ICD counters considered it a heart beat.  This made a heart rate of 120 look like a rate of 240.  Since 240 beats per minute is way over the threshold for danger, the ICD delivers a shock. ICDs can not discern a real arrhythmia from artifact in most cases.

Most patients can tolerate one shock, as the pain is over almost before the brain has time to process the magnitude of the insult.  But almost no one can tolerate multiple shocks.  The first shock starts the fear cycle.  First is extreme anxiety, but after a second or third shock, anxiety from the possibility of more shocks progresses quickly to near terror.

In this case an evaluation did not reveal any obvious cause for this out-of-the-blue over-sensing issue.  It just happened.  Fortunately, programming changes were made to the ICD sensing algorithm and things have been quiet thus far.
In the case of any ICD shock(s), reassurance to the patient is paramount. However,  reassuring words from a doctor who does not know the sensation of a painful wide awake shock often falls short.  She lies motionless in bed, wearing a painful-to-see fearful expression, as if to say “I am too scared to move.”  This sticks with you.
Wise people know nothing in life is free.  In ICD treatment this is surely the case.
For us “seasoned” electrophysiologists, cases such as this serve to further complicate the landscape of future treatment decisions.  Maybe it’s why making treatment recommendations seems to get more difficult with age.