Today was one of those days where you are hopelessly behind schedule, always thinking 3 tasks ahead, and wondering when the finish line will appear.

After bemoaning the misuse of ICDs yesterday, today I found two pretty sweet examples of how implantable titanium and silicone can enhance and extend the lives of real patients.

The first fellow presents for a routine office visit for his ICD.  Years ago, an ICD was placed prophylactically because a remote heart attack had damaged his heart.  He had no prior symptoms of arrhythmia. He tells me one time this winter, he noted a brief episode of dizziness, lasting only a few seconds.  “I didn’t even think twice about it, Doc,” is what he said.

Here is what we found upon interrogation of his ICD.

The picture shows a spontaneous episode of rapid ventricular tachycardia. The real deal.  The sort of arrhythmia which sends one to heaven, ‘right quick’ (as we say here in KY).  Not only did the ICD terminate the VT, but it did so with painless overdrive pacing–a shock was not required.  Overdrive pacing means the device gave 8 paced beats slightly higher than the arrhythmia rate.  These painless paced beats resulted in termination of a life-threatening arrhythmia in only seven seconds.  Granted, one cannot say for sure that this sudden-death creating arrhythmia would not have spontaneously stopped on its own, but it sure was a sweet intervention, for if the VT persisted any longer he would have surely died.

The second case also brightened my spirits.  The postcard was in the inbox lying amongst the many other mindless forms which separated me from my evening bike ride.

This patient is a recently retired professional man. He was one of these middle-aged folks who mysteriously developed high degree AV block.  His pacemaker was placed years ago, but of late, he had grown dependent on the ventricular pacing.  A vague shortness of breath, a significant decrease in exercise tolerance and generalized fatigue had insidiously developed.  The shadows (ECHO) revealed a low ejection fraction and that characteristic LBBB-induced dsynchrony.  His cath showed no coronary blockages.

As he was a lifelong endurance athlete, even with the pacing-induced heart muscle weakness, he was still able to exercise, albeit at an unacceptably low level.

The backside of the postcard from Florida says it all. 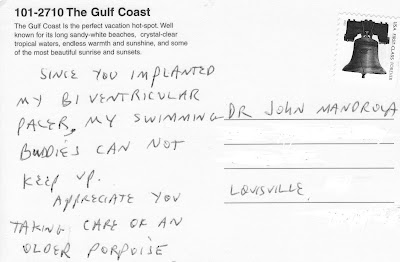 To have a fair (and balanced) website, I must present the good along with the bad.  Successful stories like these keep the doctoring fire alive.

Tonight, at the first kids cyclocross practice of the year, the father of a young man who shadowed me a few months ago said that his son’s day in the EP lab was a day to remember forever.