Having friends to ride with is good.  I’ve missed riding with her.  We rode last night, and it was nice.

She is of bavarian heritage, a little over-engineered, possibly. Unfortunately, of late, she has spent a great deal of time either too sick to accompany me on rides, or even worse, she has been away in rehab camp in a faraway state.  Now she is back home.

She is soft spoken, speaking only when I look at her, and always speaking the truth–always the truth. Her language is numbers, and numbers do not lie.  Math is cool this way. 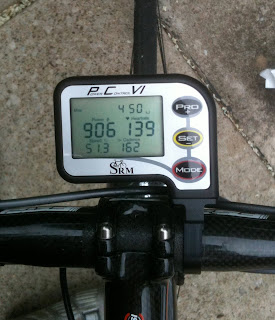 She never says, “hey John, you are riding so strong.”  In fact, she never drones on about anything. There are no stories about a fourth episode of mononucleosis, or how the race was almost won, if only I bridged up to that breakaway.

The language of mathematical truths has phrases that include: maximum efforts, speed, calories burned, and the most fascinating of them all, watts–a quantification of your bodies mitochondria. It is true, in 2010, the strength of our cell’s powerhouses can now be displayed–without emotion–on a clearly visible screen.  For the masters cyclist, aka, those with many birthdays, this clarity is usually sad news, as it speaks of which arena in which we will compete.

That is, in the company of all the other like-aged racers within, “the Never Land where Peter Pan Masters spend their weekends, and dream time.” Where the “parallax is as sensible as the parallel.”

I think she whispered to me last evening to keep doctoring, writing and grinning.

Tonight we will see what she says when we play with the big dogs.

4 replies on “An old girlfriend is backâ€¦”

What did she say tonight.

She said, ouch, and stick with the Peter Pan Masters.