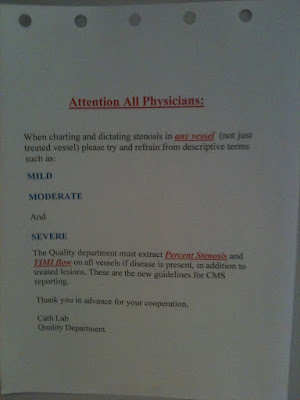 Now, one can’t say the words mild, moderate or severe. CMS, the government, or the payer, in describing blockages, no longer recognizes descriptive words.
To a non-squisher cardiologist this seems silly. Let it be known that the exact percent blockage of a 3 dimensional mobile structure taken from a 2 dimensional still picture is unknowable, except to categorize as mild, moderate and severe.
Let us make a “mild” blockage equal to or less than 33.33333%. Likewise, a 39% blockage is “moderate.” Truth is, there is no clinical difference between a mild 33.333% blockage and 39% “moderate” one. The treatment of both is to live healthy and probably take a statin (cholesterol lowering agent).
These language mandates are mindless gibberish and yet another reason to minimize government creep into medical judgement.
Seem trivial, maybe so, but mandated irrationality is offensive to masters of the obvious everywhere.
JMM

2 replies on “A bad day for simplicity today…”

Humans, and risks, are continuous variables and there is an incremental risk as these percentages increase. That is why discrete cut offs based on numbers are bad for patients. Not all "bad" ventricles are really bad!!

Another master of the obvious…Thank you, SBP